With the eggs saga, I have another 5 eggs waiting to be utilised and the first thing that came to my mind was CHIFFON cake! Since my Pandan Kaya Cake was well received, I decide to make it again. It was a mad rush as I made this on the same day as the Condensed Milk Pound Cake. Moral of the story is, do not attempt to be too ambitious! 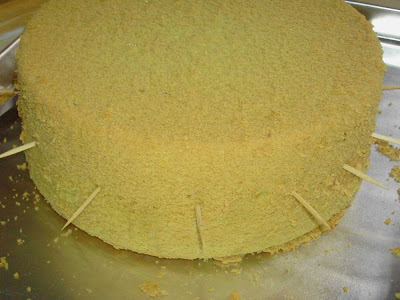 I do not have many gadgets at home so I just DIY and use toothpicks as a guideline for me to slice the cake into layers. 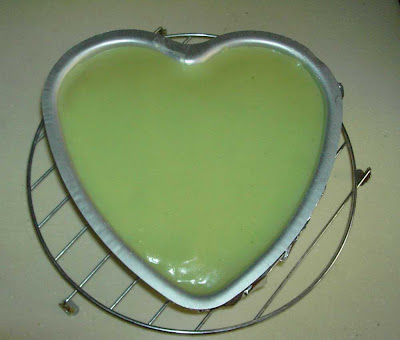 A 4 eggs recipe yields a tall cake and if I want to layer with cream/kaya, this recipe yields 2 cakes. I made one in a heartshaped pan, for SL's family. 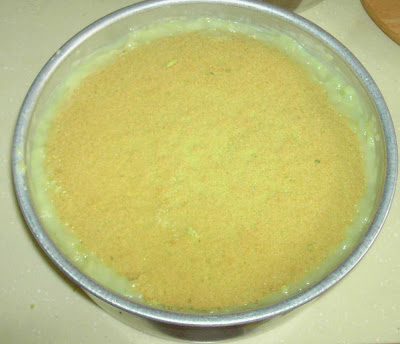 Instead of spreading the kaya on top which I did previously, I decided to do it in the pan, upside down. Got this idea from Table for 2. I didn't bother to slice the cake smaller so I just use a small knife to push the edges in for the kaya to flow through. 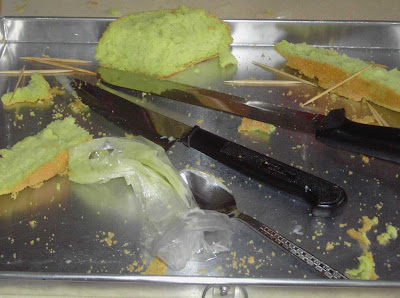 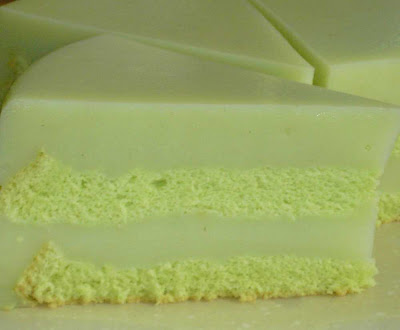 Instead of adding colourings to the kaya layer, I blended some pandan leaves with water to get a natural green. I can call this an all natural cake (minus the cream of tartar) with no preservatives and artificial flavour ;-) I should have used more pandan leaves for a darker green kaya layer.

To assemble the cake upside down

To assemble the cake upright

Posted by Blessed Homemaker at 11:28 PM

You bet! It was alot of work but definitely worth the effort. You should try making this one day ;-)

Wow... I really want to try this. Just wondering..
1) u mention to use a chiffon cake pan.. the one with a tube in the middle? But you seems to have used a normal round pan..
2) i see u recommend to cut the cake up to 4 layers.. 2 layers is ok as well?
3) for kaya layer.. how many pandan leaves did u used to yield 400grm juice?

Sorry if I've caused some confusion. I've made the changes in my recipe.

Depends on how you want to assemble the cake. If you do it with a cake pan/cake ring, I'll suggest you use a 2 or 3 eggs recipe instead of 4. If you use 4 eggs, it'll be too tall with all the kaya layering. Of course, you can always slice it into 2 layers.

I didn't count the pandan leave but I think you can use about 7 - 9 leaves to blend with 100ml water and mix together with balance 300ml to make up 400ml.

Hi, I read your cream cheese chiffon cupcakes. If you wanted to turn those cupcakes of your upside down, you need a stronger cupcake liners, you can try with the one you are having but I used the brown paper ones. You only need to thread a piece of kitchen twine with a knot at one end through the base of your paper cups. After the cakes are done hold the thread and tie the cupcakes onto a broomstick rest horizontally. Ta..da, done.

You really are good at baking ! I love Pandan Kaya cake alot.

airenchan,
Thanks for your tip!

FT Housefly,
I love this cake too! Now that I know how to bake this, no more store bought cakes!

Oh now I see the linkback to my post.
Thanks!!!

Ur cake looks delish.. nice thick layers of everything. Sometimes I'm too lazy to use toothpick, so the layers get all uneven. kekekeke. I've bought myself a Wilton cake layer cutter, but haven't been using it yet.

Wendy, now I also don't bother to use toothpicks :P I just estimate and slice, so far so good. I was contemplating if I should get a Wilton too but after some thoughts, decided against it as it's another gadget that may end up as a white elephant.

Wanted to try this as my son b'day cake.

Annie,
This is a chiffon cake recipe so no, you can't use a non stick pan. You can use a 10" cake pan but do adjust your baking temp and time. Also, your cake will be shorter.

Hi! If I want to assemble to cake upright, how can I cover the sides of the cake with kaya? Do I have to remove the cake right then assemble the cake?

Michelle,
If you look at my pics, this cake was assembled upright, but you'll need to use a cake pan with removal base/springform.

You need to use a bigger cake pan. Eg, you bake your cake in a 7", assemble your cake using a 8" cake pan.

Also, I personally prefer to assemble the cake upside down using a regular cake pan. In this way, I don't have to worry about leakage.