It is a tradition for married couples to give red packets to unmarried juniors during Chinese New Year.   Red packets are also known as 压岁钱 (which literally means using money to suppress or put down the evil spirit) during this period.  It is also a tradition to put brand new notes inside red packets.
My first trip to the bank was unfruitful as they ran out of new notes and was told to come back the next day.  The second trip yielded no favourable result too as new notes were running out fast.  I only managed to exchange new notes on my 4th trip to the bank.
While I in the queue, I overhead a commotion.  A couple in their fifties and an elderly (probably in her eighties) were attended by a Malay staff.  The staff explained that since the elderly only speaks and understands Teochew, she couldn't proceed with the withdrawal transaction as she was worried the elderly may not be aware that money will be withdrawn from her account.  The staff explained that she will have to refer them to her Chinese colleague so that mutual communication may be carried out.  The couple showed their displeasure and insisted that the old lady is aware of the happenings.  Apparently, the withdrawal is in the form of a cheque, addressed to the younger lady.  Given the benefit of doubt, the elderly may be withdrawing money on own accord but we have heard and see many cases of elderly being cheated of their hard-earned money.  I applaud the staff for their conscientious towards this matter.
----------------------------------------------------------- 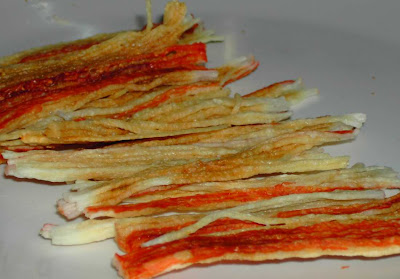 XY shared this very interesting snack in a mothers' forum a few weeks ago.  I never like the idea of deep frying so I started off with the microwave.  They turned out crispy alright but some ends turned brown due to the uneven heating.  Next I tried baking in a low temperature oven, with and without oil.  The crabstick turned out crispy but the whole lot got stuck together despite a stir in-between baking time to break them up.  Finally I resorted to deep-frying but it was way too oily.  I'm definitely going to make this again either with the microwave or oven, no more deep-frying.  This is a simple yet delicious snack.
I'm sharing the method of cooking this with microwave.
Fried Crabstick
Ingredients
1 packet crabstick, shredded
Method
Posted by Blessed Homemaker at 4:41 PM

Maybe u can toss the crabsticks in some oil before microwaving??? So that they won't stick? Actually if u fry at the right temperature, it won't be oily.

They look delicious, I'll sprinkle them on porridge. Extra yummy!!

One more thing,
I didn't exchange new notes at the bank this year, because I recycled my kids angpow money.
Last year, I took all their new notes and deposited their angpow money into the bank using old notes. I kept the new notes for this year's angpow.

Saves a lot of hassle.

Oh great! Will try this at home :) Thanks for sharing it.

I saw few bloggers making this and looks really crispy, will do it probably next year. I have already stopped my cookies baking, my pineapple tarts is the last.

This looks great. I will have to try and make this at home.
I enjoyed your explanation of the tradition too.

I've seen somewhere bloggers doing these by deep frying...I've never tried doing this before , do you just eat it on its own or as a side dish ?

Ya, like Wendy said, if u fry at right temp, it would not be oily. I still prefer this to be fry, very crispy and nice. Wishing you a Happy CNY.

Wendy, the crabsticks don't stick when microwaving. I hardly deep fry thus I can't get the temperature correct :P

I used to recycle the new notes from my kids' red packet but stopped doing so since 2 years ago as I didn't want to keep too much cash at home.

Anncoo, good for you that you're done with your CNY baking. I have 3 more to go, planning to make nian gao today.

Lady Ren, thanks for visiting me. You've got an interesting blog.

Pearlyn, you can eat it whichever way you want ;)

I usually fried it in thin rectangle, but not in shredded. I saw from fengyingrecipe, you can also try to bake in 170C for 10mins

Looks tempting! Btw got an award for you. Remember to pick up from my blog. Happy Chinese New Year and huat ah!!!!

Hi
i tried it today; absolutely great results. First batch did not look impresive so i fried them. Turned out dark and too crispy. Microwaved ones turned out good. Thank you for sharing. Linked your site to my site. Thank you again.

I've tried a few brand of crab stick but failed, turned out not crisy, chewy instead.

can you advise what brand is best to fry and will be cripsy? need to wash them?

Esther, I did not wash mine.

may I know what brand you buy? from NTUC?

Esther,
No specific brands, I just buy whichever brand that is on offer :P