I love 年糕 (pronounced as nian gao which literally means Year Cake) especially the traditional ones steamed in banana leaves.  You can either eat it plain or sandwich them with sliced sweet potato and yam, dipped into flour batter to deep fry.  However, I find the commercial ones generally too sweet to my liking and was scouting around for recipes.

The challenge of making 年糕 is the long hours of steaming.  I first spotted Gina's recipe (white version) in Kitchen Capers 2 years ago but I wasn't keen to try it until DS2's former nursery teacher passed me a recipe a couple of weeks ago.  She was at Kitchen Capers Store and saw Gina in action, conducting a nian gao making demo so she took a recipe for me.  With this coincidence, I decided to give it a try this year. 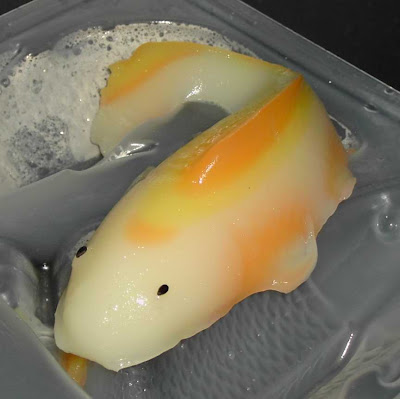 A big boo-boo happened while I was steaming the coloured layers, I ran out of gas!  Yes, I'm still using LP Gas which I find it more economical.  While waiting for the gas man to deliver my new tank of gas, I can only pray that my fish will turn out alright. 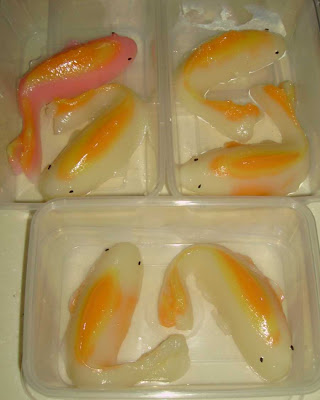 I've oiled the moulds fairly well after reading Pure Enjoyment's encounter but it was still difficult to unmould the tails.  Out of the 7.5 fish 年糕 I made, none of the tails came out intact :-(

The taste is unlike the traditional 年糕 (I thought it tasted like tang yuan) but if you ain't fussy, this is a good substitute ;-)

Method to make the liquid batter
Method to steam
Note

Posted by Blessed Homemaker at 3:12 PM

This Nian Gao look more difficult than my traditional Nian Gao, but I like the fish shape. Wishing you a Happy CNY and Happy Holiday !

woahh at a glance i thought it was REAL FISH!!!!!!!! well done! looks very realistic!

you have very careful hands...very artistic :). keep it upss!

This is your first attempt? Looks perfect and the colour is beautiful.
Happy Lunar New Year!

My cousin once brought some nian gao fishes back from Hong Kong, and maybe due to the fragrance they used, we didn't want to take a 2nd bite into the cake. As u said, rose water was used, it could be that that backed us off.

But urs use pandan, so they may be better, but I don't think I want to eat them, cos they are too pretty to be eaten. Got any more to spare??? Lydia loves keeping fishes :)

These look so beautiful! Feel like the fish are swimming before me! Well-done!!

ur fish is soooo nice!!!

Sonia, thanks! I still prefer the traditional nian gao, if time permits, I'll make that next year ;-)

Ann, you're the first one to say I'm artistic! I'm really lousy with my hands :P

Anncoo, thanks! Yes, it's my first attempt and I hope to improve on it the next time I make them.

Wendy, I thought it tasted like tang yuan/mochi :P I've not tried the white version so I don't know how it taste like? Can I email you a fish instead? ;-)

Pei-Lin, thanks! Happy new year to you too!

Simonne, thanks for your kind words :)

I thought these were very nicely done. Great job!

kwf, thanks for your kind words :)

MH, you can get the moulds from bakeware shops. They are actually jelly moulds but of thicker material and thus safe for steaming.

I went thru the same hard time trying to unmould the fish using the same recipe. =p

Cookie, what a coincidence. I think we didn't oil it enough, especially the tail portion.