It had been a while since DD1 last updated her blog and today she wanted to blog about the Gula Melaka Agar Agar I made over the weekends. Initially, she wanted to post the recipe in her blog but since I've not posted mine, I told her to wait till I've uploaded pics and recipe before I help her with her blog. 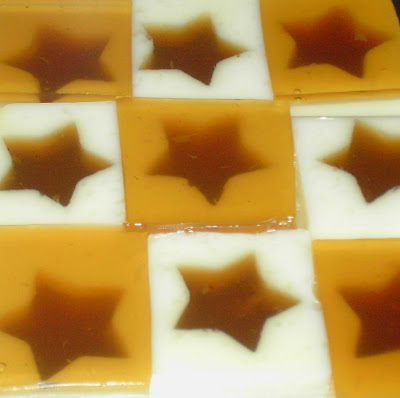 I saw this recipe in Lily Ng's blog and since I've got some condensed milk to finish up, this is it. However, I didn't shred the milk layer originally called for, I adapted Lee Lee's pattern agar agar. 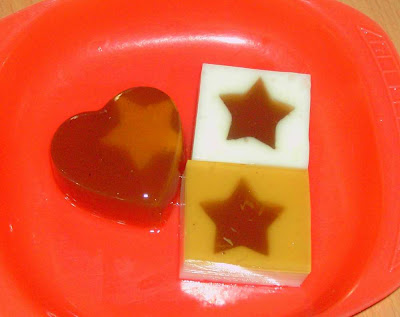 Again, the kids were thrilled! :-) However, they prefer the brown agar agar over the milk layer agar agar. I brought some back to my parents and they like it too.

Posted by Blessed Homemaker at 2:40 PM

One of my Malay friend do a good gula Melaka agar-agar, but your one look not bad also.

can replace gula melaka with something else since I cant get gula melaka?

it's ok, I just found out that gula melaka is palm sugar, which I have here.

Great minds do think alike. I was inspired by Lily and Baking Mum too that's why mine looks like this:

Isn't it similar to yours!

Quinn,
Both of us used the same star shaped cutter! What a coincidence!