During my last trip to Melaka, I stocked up on quite a bit of gula melaka.  With an abundance supply sitting in my fridge, I googled for recipes to utilise them. 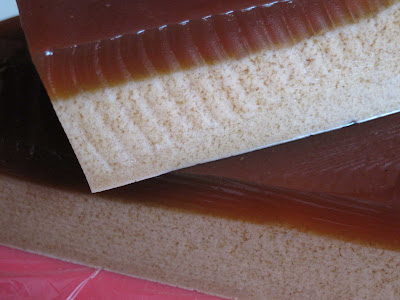 Found a few gula melaka agar agar recipes but decided to go for this one (by Amy of Che Cheh) which has minimal ingredients. 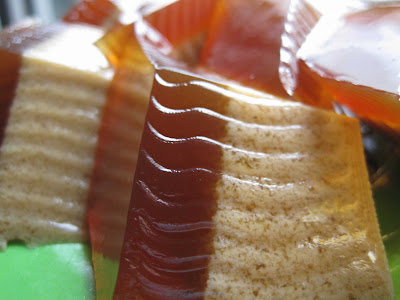 Posted by Blessed Homemaker at 11:04 AM

your agar agar is so beautiful! your layer is perfect!

This is yummy! Love the separate layers on the agar2x. Did you stir while you cook? Cause I ever read somewhere that to get this separate layers, stir too much is not advisable. Don't know is true or not?

My favourite .. anythg with coconut, my fav. Yummy.

Thanks Jess, but I don't know why my coconut layer is so thick.

DG, yes I did stir when mixing in the coconut milk.

thanks for sharing this recipe
i tried it n it was yummy but just some questions hope you can help me with .

but i manage to get 2 seperate layers (:

hope do get your reply soon

hi possible advise me that which type of agar agar powder that u use? i love this gula melaka agar agar, but i dun know which agar agar that i can buy.... thanks and appreciated it

Hi...I tried this agar agar & flw as per your instructions but ended up with a whole block of gula melaka agar agar (like the gula melaka layer of the chendol agar agar) instead of your 2 nice layers. Don't know where went wrong. Any tips on this? Thank you.

Anony,
I don't use a specific brand.

Jer,
So sorry, can't help you on this.

All this cream and milk, thick and thin blurs me

Sherlyn,
I'm not sure too but i know coconut cream is thick. If I have coconut cream but recipe calls for thin coconut milk, I'll prob just dilute the cream with water :p. Not sure if it is the correct way but that's how I'll do it hahaha...

I think the same like you, diluting the cream to make it more watery. Today I tried to make kuih, so called for coconut milk, thus I diluted the coconut cream with milk instead of water. Anyway the kuih did not come out successful. Will try again.
May I ask, your gula melaka agar agar can use the cream direct? since it ask for thick coconut milk.

Sherlyn,
Not sure about coconut cream as I never bought/use before. Find it too sinful thus I always buy skim coconut milk :P

Thanks Blessed Homemaker. *sigh* My agar agar failed to separate.

Sherlyn,
Oh.. so sorry to hear that. I guess I was lucky :P

Sherlyn,
Could it be that you are not letting it cool enough before you refrigerate? Refrigeration too early can lead to the agar agar solidifying before the coconut milk is able to sink to the bottom.
Just a thought.
Dod

Same here, mine failed to separate too.. Maybe Dod s correct, too early into d fridge..