Of late, it seems that I've been cooking/baking more that I could blog. I always wonder, how do other bloggers keep up with their blog or are they facing the same problem as me?

For my next few entries, it will be on some TCM cough remedies which I've prepared for my children last week.

Despite being on antibiotics, the 2 younger ones were still coughing away and they're moving into week 4 now. We have seen the doctor twice and I was resistant to bring them for another visit. IC has many soup recipes so I asked if she had one for cough. The next day, she emailed me a few recipes and I shortlisted the easiest one to try out. 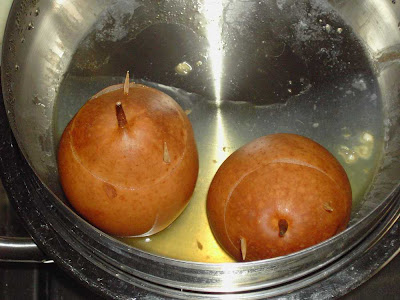 When I went to one of our local chinese medical store, I was advised not to give fritillaria to a young toddler. Instead, he recommended another product which I kindly decline. I visited a 2nd store and was given the green light to go ahead. With 2 different messages, I was in a dilemma if I should go ahead with this recipe. Nevertheless, I bought the fritillaria (better quality ones) thinking I could still give my 2 elder children.

This recipe originally calls for 1 large pear but I cooked 3 small ones instead. With the uncertainty of fritillaria's usage for my 20 months old toddler, I used 1 recipe for 3 pears instead. Of course, the effectiveness will be compromised but I just couldn't think of a reason not to make this. 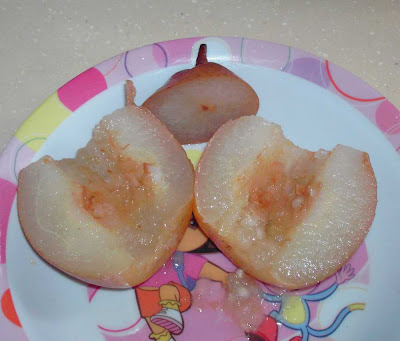 No water needed for this recipe and despite reducing sugar, it was way too sweet. I cut a small chuck for DD3 and she grimaced at first bite. Sigh... With the pathetic "soup" base, I added some warm water to dilute the sweetness and offered her a drink. Again, she spitted it out and wouldn't go for a 2nd sip. Instead, the 2 older ones enjoyed themselves and kept asking for more.

Double Boil Pear with Fritillaria (川贝蜜梨)
(Original recipe in Chinese, thanks to IC for the translation)

* 适用于声音嘶哑，干咳无痰、或常需说话或唱歌者、或吃过多燥热食物以至咽喉干燥者
Suitable in use for:
1) hoarse voice
2) dry cough without phlegm
3) frequent speaker or singer
4) eating too much heaty food which caused dry throat

Posted by Blessed Homemaker at 3:14 PM

I was told that fritillaria are not suitable for young toddler below 10 yrs old many years ago at a chinese medical hall , it claimed that fritillaria are too strong and if you're not sure how to handle it properly it could create an adverse effect on your toddler's already bad condition. Hope this helps !

Oh no... so you see, so many different versions, indeed very confusing for parents. Headache....