My final batch of baked mooncakes for 2009. I prepared the fillings the night before and stored them in the fridge to save time since I was planning to make the snow-skin mooncakes too. 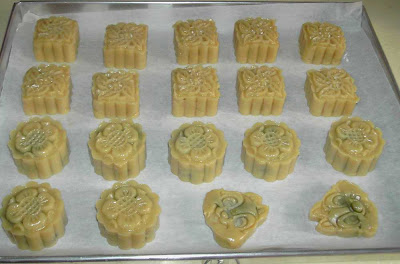 Using the same recipe, I made this again but increased the fillings. The square ones are with white lotus paste fillings and the round ones with green tea paste. I had a total of 17 plus 2 disney character mooncakes. 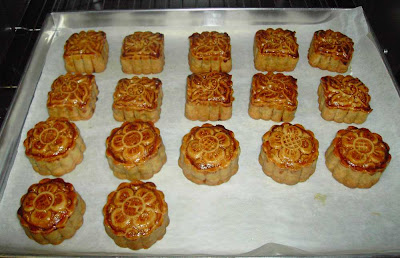 I had to remove the Chip N Dale mooncakes from the oven first as they are much thinner and browned faster. 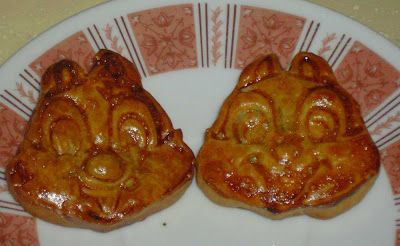 The 2 elder ones went "WOW" over these moonies. Like I've said before, kids are so innocent and easily satisfied ;-) 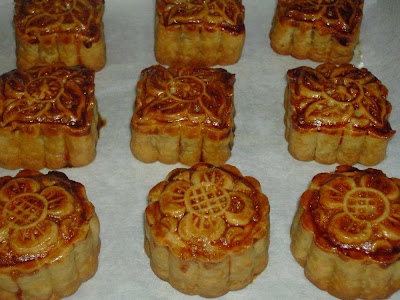 I've diluted the egg yolk with 1 tsp of water and beaten it well before dipping the whole mooncake into the egg yolk. However, the browning part still cannot quite make it. It seems patchy too but at least better than my first lot. Anyone knows why?? Maybe the yolk is still too thick? 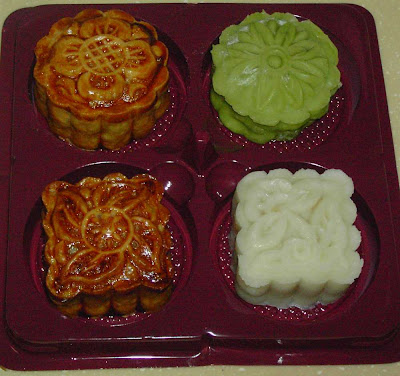 Packed these to be given away, I do hope the recipients don't mind the ugly looking mooncakes :P I'll strive to do better next year! Also, I must remember to make the baked mooncakes FIRST, don't want to have another round of mad rush like yesterday.

Look like those selling outside, well done. Wishing you Happy Mid Autumn

Thanks! You've been really kind, but mine still patchy, don't understand why... Happy Mid-Autumn to you and your family too!

Looks really good....dun be so hard on urself!!!

You did a great job. 中秋节快乐

Thanks for all your kind words :)

can i make the skin in advance? thanks

hi
can i make the skin two days in advance? thanks

Hi Anony, I've not tried making the skin in advance. Sorry, not of much help here.

What is "Hong Kong Flour"?

Ean,
Hong Kong flour is an all purpose flour that is bleached, usually used in making paus.