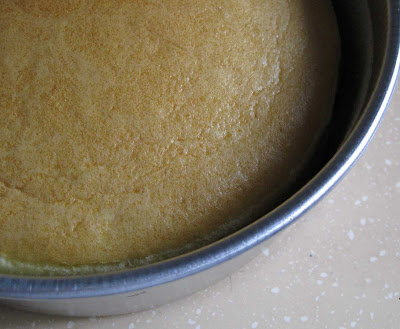 I'm so happy I found this recipe in Zu's blog as I don't usually have cream cheese in my fridge but sliced cheese, yes, always! 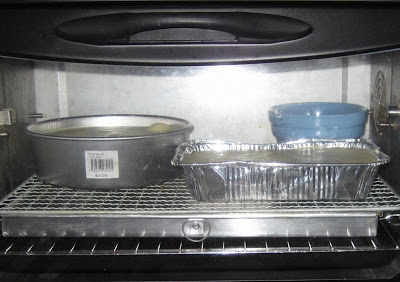 It was an impromptu decision to bake this. I started measuring the ingredients at 11am and by 11.15am, I was already washing up the utensils ;-)

The cheese batter was very watery and it was difficult to fold into the whisked egg whites.  After a few strokes with the spatula, I gave up and switched to mix with a hand whisk and it worked.  Such a breeze!

I baked them in 2 pans, hoping to shorten the baking time, so I could be on time to fetch DS2 from school. However, the baking time was still very much the same. It was my mistake because I used a 7" and a loaf pan, should have used a 8" pan plus a loaf pan. Also, instead of using baine marie/water bath method, I placed a bowl of hot water into the oven with the cake pans for the steam effect. 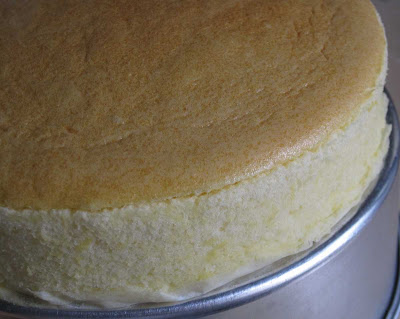 I thought my interval from my last cheesecake baking was good, at least 3 weeks, but I was wrong.  The kids didn't even want to eat this!  They gave me that "Huh?  Not cheesecake again!" look.  No prize for guessing who ultimately finished it up :-| 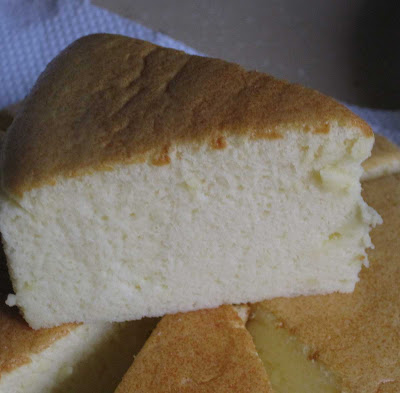 The texture of this cake is very much like the Japanese Cottony Cheesecakes I have made earlier. It yields a soft and moist cake but I thought it was abit too moist and had this mushy feeling when you bite into it. May need to reduce liquid or increase flour the next time I make this.

Posted by Blessed Homemaker at 12:01 AM

Does this mean we can use any cheese in the fridge? Your cake turned out really well.

I like to use balloon whisk to incorporate my egg whites these days. seem to work better than the spatula and run less risk of inflating.

The cheese cake looks soft and fluffy. I wouldnt mind having it weekly.

Meldylocks and Her Three Bears said...

Looks perfect to me! The colour's nice!

I never know that sliced cheese can be used to make a cheesecake! Will love to give this a try, like you I always have sliced cheese in the fridge :)

This is a perfectly baked cheesecake for me! No crack, smooth surface, evenly colored at the top. I love this kind of soft cheesecake. Thanks for sharing, I've bookmarked it and will try it when I fully recover from my sickness. Thanks!

You bought a new pan? Label still on :)

The cake looks good to me. Soft and moist til it feels slightly mushy eh... "Featherlight cheesecake" also tasted like that.

mysimplefood,
Yes, you can use any brand of sliced cheese.

bakertan,
I was afraid I might deflate the whisked egg whites and had been using the spatula diligently, until I made this cake. Now I like to use the hand whisk too.

HHB,
Yes, most calls for cream cheese recipe and I'm so glad I found this. If you don't like mushy cheesecakes, remember to tweak the recipe. Can't wait to see your blog entry.

Grace,
Thanks! I was over the moon when I saw no cracks on the cake :) Hope you get well soon.

olga,
Thanks for visiting.

Wendy,
It's not a new pan, I didn't remove the price tag :P

This sounds interesting to use sliced cheese. The cake looks very moist and fine in texture and delicious too. Looks quite like a chiffon cake. Thanks for sharing.

the cheesecake is so perfect without any crack,looks soft and spongy, yummy!

busygran,
I thought it tasted more cheesy, but then again, it could be due to the brand of sliced cheese I used.

Mary,
This is indeed a very moist cake.

Jess,
I love the look of this cake too!

I didn't get a reply to my last message so I thought I'd drop you a line as this campaign is now live and we would love to still have your support and hope that it would benefit your readers.

Just to recap, the first element is an online jingle contest - SIS Jingle Jam - where families record their own version of the original SIS Sugar Jingle. I hope this would appeal to your readers as there are on offer a range of premium Philips equipment and tools to help them with their culinary pursuits. For more information about the Jingle Jam and prizes up for grabs see the Facebook fan page http://tinyurl.com/2f2n6r7

The second element is a bit of a celebration of all things sweet down at Palawan Beach, Sentosa on 7th & 8th August being held in conjunction with the filming of the Great Singapore Cook Off!. The day will include mixing and icing demonstrations for mums and kids - to try their hand at mixing and decorating with prizes for creativity, cupcake decoration contest, sampling of nostalgic treats and more. We would love for you to join us as our guest on one of the days if you would be free and able. If of interest I can forward you the schedule.

Lastly, we would love for you to guest post a favourite sweet recipe of yours to the SIS Sugar Fan Page and perhaps even provide us with a sweet tip of the week. We really hope this become a great place where people come together and share their recipes and love of sweet things. We would hope that this would help you attract some new followers. The page can be found here: http://www.facebook.com/pages/SIS-Sugar/110188989033875?ref=search

These are all just ideas are none are by any means obligatory! It would good to hear your thoughts on what you think would work for you, your blog, and your readers.

Looking forward to hearing from you.

I can't believed - slice cheese make into cheese cake? That means if I can make this well, I do not need to wait for cream cheese offer. hahaha.

Must schedule a date to try this. Dh overseas coming week for the whole week, so must wait till he comes back.

Folding egg whites in with hand whisk, u mean instead of use spatular, use the balloon whisk to stir the beaten egg whites?

Sherlyn,
I always stock up on cream cheese when they are on offer too!

When folding whipped egg yolks to egg whites, I had problem when I was using the spatula as the yolks batter was too wet. Using the balloon whisk is much easier.

but it looks good enough!

This looks very much like the Japanese Cotton Cheesecake. Looks good - wanna try this too.

Yummy Koh, do let me know how this turn out for you.

Help Blessed Homemaker .... I actualy wanted to try this one today .. but after reading the pan size u used, I notice I cannot squeeze in so many ... will I be able to portion the recipe, use just for 7-8 inch round pan?
How should I adjust the recipe leh?

Sherlyn,
You can use 8" pan and extend the baking time.

Are you saying, no need to reduce recipe, use as it is and put into 8 inch ?

The reason I baked in 2 pans was to reduce the baking time.

You are fast. Thank you Blessed Homemaker. I am tired leh .. got to go sleep :( Gd nite.

Blessed Homemaker.. I finally baked it and updated my blog too...*phew*

I took much longer time to prep everythg *sigh* and I want to check with you, my cake rose during baking, it is correct?

I still have the sunken cake problem. Sigh.

How did you unmold the cake? The top sticks to everythg so cannot flip ya?

Sheryln,
I'm glad you made this :)

My cake rose during baking and shrunk when cooled too.

If I remember correctly, a sunken top is determined by how well you beat the egg whites. I may be wrong though.

Once the cake is cooled, I unmould it using a kitchen towel and invert,then quickly turn it back upright again. Remove kitchen towel.

My cake did not have crater at the top, but it rose so high then it sank. So yours only rose till the height and stop there and stay there when it cools?

hehe sorry so many qn.

I am not sure if my comment earlier went through ..

incase it did not ..

My cake did not have a crater on top .. so it just rose high high then sunk almost flat. So yours just rose to the right height and stay there till cooked?

Sherlyn,
Sorry I wasn't clear in my earlier explanation.

My cake rose up while baking but when cooled, it shrunk in height. Not sure if you can see it in my first picture, the sides shrunk by about 1cm, the height was reduced too.

mine cooked in 40 mins and top cracked

Anony,
Different oven works differently. I suspect your oven temp is too hot.