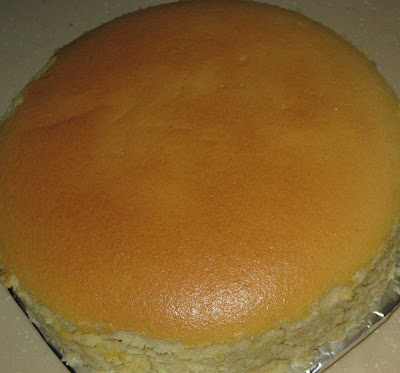 As I wasn't satisfied with my Japanese Cheesecake texture, I made it again since I've got the balance 1/2 block of cheese sitting in my fridge from my previous attempt. 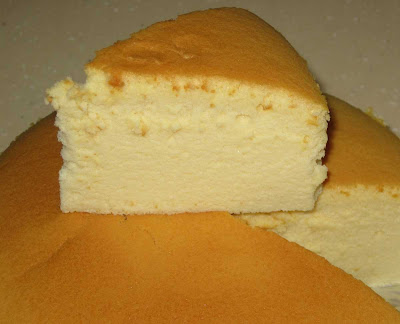 I'm pretty sure I've got more accurate measurements this time round as the texture was moist and soft.  Yes, I did it! :-)  But instead of making just a regular cheesecake, I added some Baileys Irish Cream into it for extra flavour.  Taste good but kids got sick of eating so much cheesecakes and decided they've had enough.  I end up eating the whole cake.  Sinful...  Lesson learnt, do not attempt the same recipe within a short period of time.
Baileys Japanese Cotton Cheesecake
(adapted from Alex Goh's Fantastic Cheesecake, from here)

Posted by Blessed Homemaker at 3:28 PM

Oh, I'm so glad you got it this time.

Can send some over???

Looks good and soft. I too have to eat up my own cakes cos my family are not into sweet things. :(

I love cheesecake. Looks sooo good...I can eat the whole cake too ;D

Oh wow, this looks irresistibly good! Thanks for sharing this, till now I am still looking for Alex Goh's Fantastic Cheesecake book! Wow, Bailey...coffee scent, yum!

the cheesecake looks gd, i think my daughter olso get sick of my cakes as well, probably my inlaw too :P. Luckily I stil ve my sis n bro, and also my office and dh's office to be guinea pigs hee hee hee

Wendy,
I'm glad this turned out well, thanks for sharing!

Busygran,
The good thing about homebakes are we can reduce sugar accordingly.

HHB,
I'm sure you can bake a nice cheesecake given your skills. Waiting patiently for your blog update ;-)

Anncoo,
Oh yes, I can tell you love cheesecakes as you have so many cheesecakes recipes in your blog!

Honey Bee Sweets,
Thanks for dropping by. Oh yes, coffee! Great reminder! Next time can add in Baileys and some coffee powder for more flavours ;)

Jess,
Lucky you, still have so many people to eat them up. I just try not to bake so much now :P

*LOL* Yea, good advice. It's so true not to attempt the same thing twice in a real short period of time. I'd only do so unless 我覺得很不服氣又甘心 ... Sometimes, my ego just takes over me unknowingly ... Haha! So bad.

Love your idea of adding Irish Bailey! My family loves light cheesecakes like this. So do I, but I'm fine with just about anything as I ain't fussy at all ...

Pei-Lin,
Wait till you hear my story on 发糕, I made it 5 times within 2.5 months! Like you've said, "不服氣又甘心", I just wanted to get it right but still, no luck. Thankfully I had my sister's family to finish them up for me :P

Hi Blessed Homemaker, I was wondering if you were interested in collaborating on a televised baking project I am working on? I couldn’t find any contacts to talk with you direct. If you are interested please email me at talya.stone100 AT googlemail DOT com.
Thanks & hope to speak soon,
Talya

Your cheesecake looks gorgeous! The crumb so fine and dense...yummy!

Baileys in cheesecake sounds divine!
Great job on the cake - the top looks so smooth and perfect! An amazing feat you have achieved there.

Can I omit Bailey Irish cream ?

Ean,
Yes, you can omit Baileys.

Here is how to bake cheesecake that won't crack. Pre-heat oven at 350F, when you put in your batter, turn down to 250F and bake for 1-1 1/2 hrs. Turn of the heat and leave the cake in closed oven for 3-4 hours then continue to cool down outside oven before chill in the fridge or freezer. Guarantee your cheesecake will not crack.

Anony,
Thanks for your tip!