Wendy saw my earlier posting and decided to make a Japanese Cheesecake for Mother's Day.  I saw her entry and decided to try her recipe (I made this one month ago but only had time to blog about it now).  Now, this is the beauty of the cyberworld!  So much interaction and so much to learn.
I have a satchet of matcha/green tea that is expiring soon so I just added 2 tsp of it into the batter as I didn't want to waste my precious matcha.

I have to confess, I made this without any weighing scale and most measurements are in cups and teaspoon estimation. 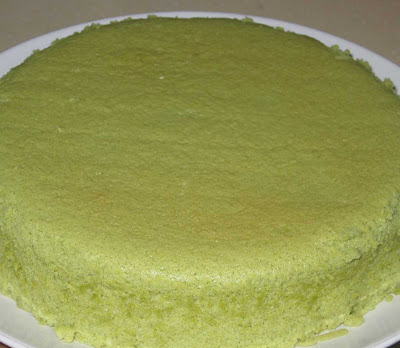 I covered the cake with aluminium foil as I was worried the cake will crack too much.  There was no crack but the top didn't get brown enough. 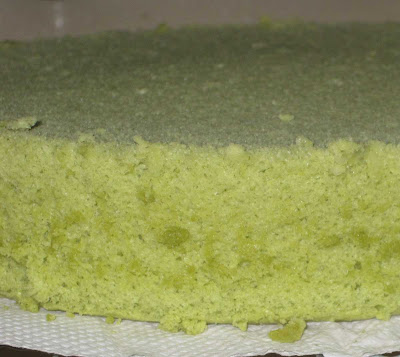 The cake turned out pretty well, slightly more crumbly and I thought it's not as moist as the recipe I have. 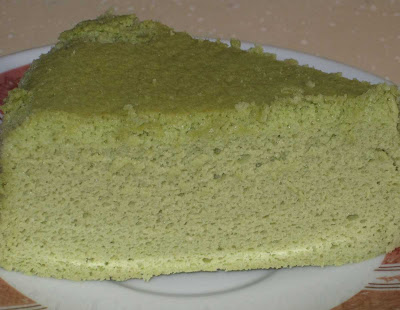 The holey cake when sliced, not as soft and moist as I suspect I didn't get the measurement correct in the first place.  I made another cake using this recipe and it turned out better than this attempt.  Will blog about it another day.
Matcha Japanese Cotton Cheesecake
(adapted from Alex Goh's Fantastic Cheesecake, from here)

Posted by Blessed Homemaker at 11:49 AM

Dry eh? I found it to be very moist.
Maybe due to the low amount of cream cheese compared to your previous recipe, maybe that's why it's more holey.

My mango version of this looked like your matcha, but my ori version was finer. Hmm.. I also dunno why.

Oh ya, you added peach the last time you made your cheesecake right, any cakes with moist fruits as fillings 100% will be moister. Maybe you add in some fruits to this recipe, and maybe it'll turn out well to your liking.

I'm going to experiment a chocolate version with this recipe, someday, but dunno which day.

I have this recipe book but haven't try out the Japanese Cotton Cheesecake. Your cheesecake looks moist and soft.

just wonder how this will taste with this combination, must try one day.

I love green tea and this cheesecake looks so yummy.

My jap cheese cake turned out like a 'kueh' consistency at the bottom,:(, was wondering whether I underbeat the batter?
Please enlighten me, tks

Wendy, I suspect it's my measurement gone haywire. I made it again with Baileys and it was moist and soft, not holey at all. Will blog when I have more time :P

I don't think it had anything to do with the peaches as I made the same recipe without peaches but with matcha. And I made a chocolate version too a few months ago, still didn't blog about it yet :P

Grace, thanks. It's not as moist as it looks like.

Sonia & Anncoo, you should try it if you like matcha.

Catherine, I suspect you didn't fold in the mixture well. Another possibility is you might have overbeaten the egg whites.