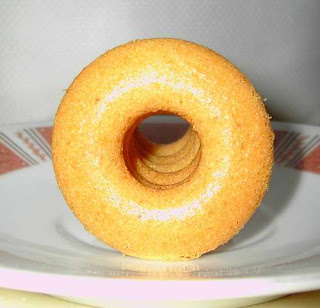 A financier is a French pastry. The financier is a light tea cake, similar to sponge cake, and usually contains almond flour, crushed or ground almonds, or almond flavoring. The basis of the cake itself is beurre noisette (brown butter), egg whites, powdered sugar and flour. Financiers are often baked in shaped molds. The name "financier" is said to derive from the traditional rectangular mold, which resembles a bar of gold.

I was surfing and saw this recipe shared by dailydelicious. I have totally no idea how this taste like but I just want to finish up the egg whites in my freezer, so I went ahead to bake this.

It's relatively simple but time-consuming for me as I need to melt the butter to separate into fat and milk solids (in French, it's called Beurre noisette) and to prevent it from burning. And not forgetting the fact that I've got a super clingy toddler, I actually made this with DD3 in my sling.

I don't have the moulds for this so I used my mini donut trays instead. Flipped them halfway to get even browning on both sides. The original recipe yields 18 pcs in the regular financier moulds. Since I made half the recipe, I should only get 9 pcs. But I had 24 pcs. This means my financiers are too thin :P 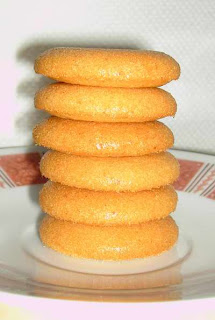 Instead of gold bars, I made gold coins :) 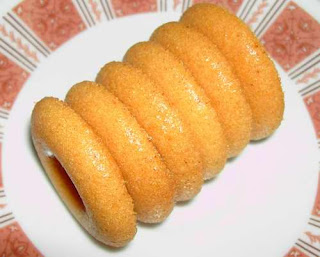 I couldn't wait for them to cool so I stole 2 pcs from the tray. It's crispy on the outside and soft on the inside. Is it supposed to be like this? I've no idea and no one to verify. If you've tried this before, do let me know if I'm on the correct track. 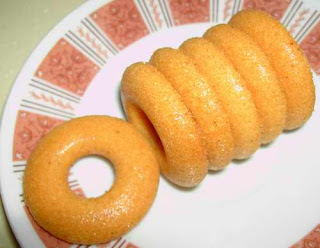 1 .Melt the butter in the pan over low heat, until the milk solids sink to the bottom of the pan and begin to brown. Remove the pan from the heat and let the butter cool completely.(it’s called “Beurre noisette”)

3. Sift the flour, almond powder, corn flour and baking powder together, set aside.

5. Generously butter 18 financier molds. Dust the molds with flour and tap out the excess.

6. Pass the batter through the sieve.

7. Pour the batter into the prepared molds, (about 25g/mold).

Hi,
If you let it cool it will be softer (due to the high fat), but my sister like it when I warm it in the toaster and the outside become crisp.

i love ur blog! i select those my hb likes and gonna try it on him. hehe guinea pig.