This is a very addictive cake, at least to me. And since I've received good reviews from my inlaws in my first attempt, I decided to give this another go. However, I used homemade strawberry yogurt as that's the only yogurt I have in the fridge. This time round, I coated the cranberries with some flour first, praying hard they will not sink. The waiting time is a killer, it took almost an hour for the cake to bake and another 2 - 3 hours for it to be totally cool.
Along the way, I took some pics, just for memorial sake, and probaby as a guide for my DDs in future if they are into baking.
Beaten egg yolks. I thought I took pics of the egg yolks mixture after adding in the flour. Apparently I did not as I can't find any such pics in my SD card. 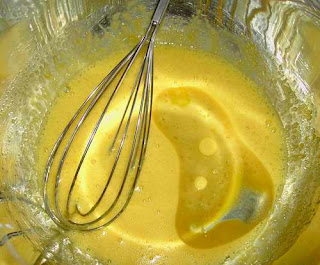 Egg whites beaten till stiff, took me about 7 mins (running on max speed) on a 200W mixer (courtesy of Auntie A). 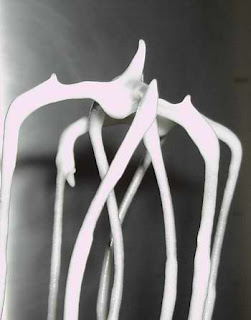 Invert the mixing bowl, the whisked whites should stay in place. 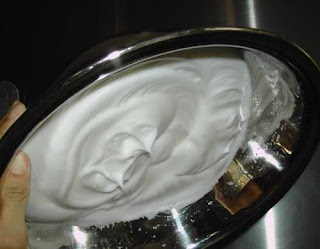 Baking in the oven, I can't see any cranberries on the surface so I got a little worried. I hope it won't end up like the other time. Fingers crossed. 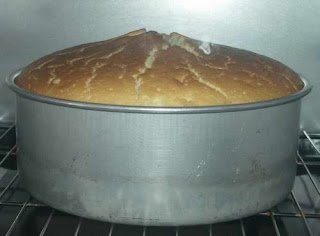 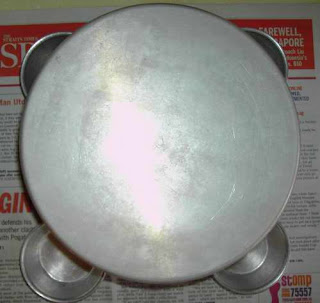 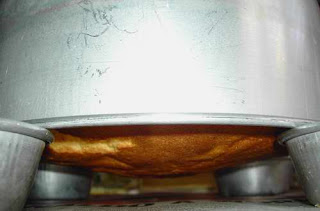 My 8" round pan is getting more "seasoned" but I still have slight difficulty removing the cake from the pan. It's evenly browned except for some slight holes that I've poked while trying to remove the cake :P 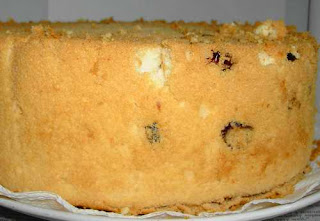 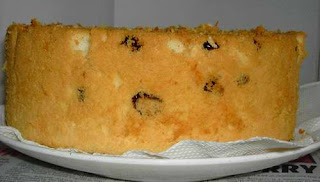 I'm very happy to see the cranberries "floating" all over the cake :) 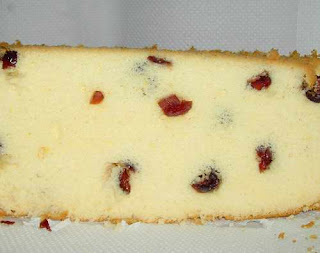 I was expecting a pink cake since I've used strawberry yogurt but the cake turned out to be orangy. Taste good too but I still prefer the plain yogurt version. 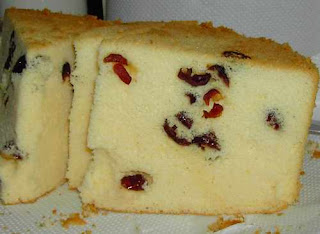 This box is for Auntie A. 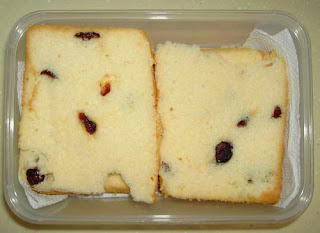 Posted by Blessed Homemaker at 1:20 AM

You're a genius using Chwee Kueh moulds to elevate the cake. You can also use a loose base pan so it is easier to remove the cake.

Rei,
I don't have a chiffon cake pan (yet) as I'm running out of space with my bakewares :P The only loose base pan I have is a non stick so I can't use that for chiffons.

KWF,
Thanks for dropping by at my blog. I'm sure you can bake a nice chiffon too. Jia you!

Ur chiffon cake looks so fluffy n soft. Im dying to try this recipe soon. May i ask WHEN exactly do u add the floured cranberries - so tht they wont sink to the bottom?

Hi Chelsea,
Thanks for visiting my blog. I've updated the recipe in this posting. Do let me how your cake turned out when you bake this ;-)

Look at how fluffy your cranberries chiffon cake, finally I got chance to try it. Infact the cake is soft, however mine seems not as fluffy as yours. Maybe it's because at that time I want to bake it, I cannot find any lemon in the fridge, instead I substitute it with milk.

Yes, we love it. The cake is soft and the sweetness just right, especially when you bite it together with the cranberries.