I know I've already baked a cake for DS2 on Friday but today is his actual birthday. I had initially planned to bake a small cake for a cake cutting session at home but since we have plans to visit my parents today, I decided to bake a bigger cake instead. Using the same chiffon cake base, I modified it into a 3 eggs recipe. 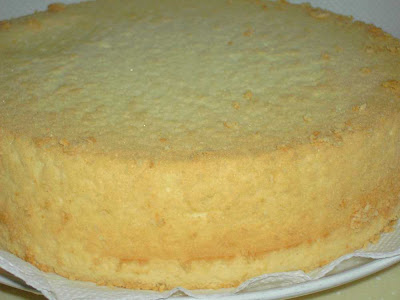 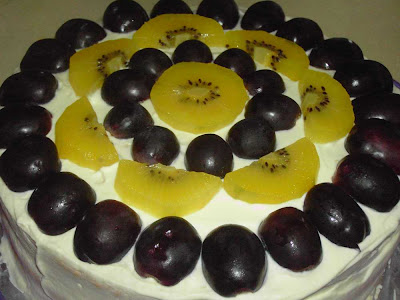 My frosting sucks, as usual, and the easiest way out is to cover them up. This cake wasn't exactly planned for and I do not wish to use candies again. Thank goodness I went grocery shopping yesterday and bought some organic golden kiwis and seedless grapes. So to save my embarrassment, my best bet now is to slice them up to cover the frosting. 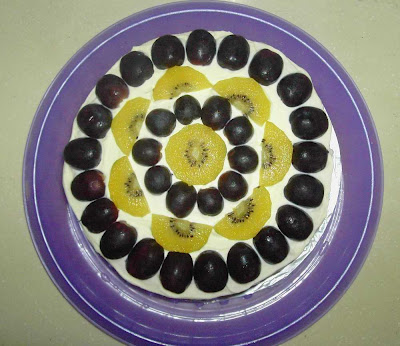 Interestingly, some of my family members thought that this was a store-bought cake! I'm so flattered! 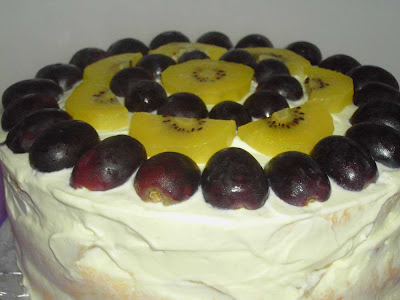 Nephew D frowned upon seeing this cake as he proclaimed he's not a fruit person. Since this is a home-baked cake by his ferocious auntie, he ate a slice I gave him :P 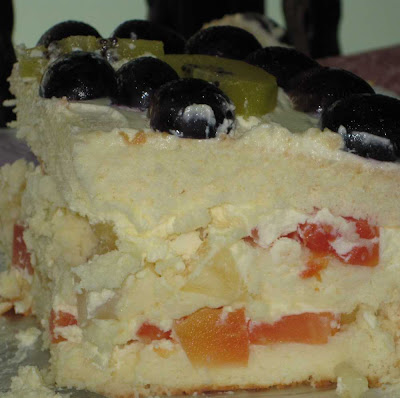 The cake collapsed as I was slicing it. I think it's because I've overloaded the layers with too much canned fruits. I should go easy on the fillings and not be too generous.

Posted by Blessed Homemaker at 4:55 PM

Dont it to care of the collaped, so long it taste good..and this is homemade cake, no complaints at all..

It looks appetite and yummy!Sometimes, I also got this problem - the cake collapse because of the fruit layer too heavy.

p, I do agree with Sonia!As long as the taste good!

was wondering what type of cake pan did u use? and also did u line/grease the pan?
did u have to hang the cake till its thoroughly cooled?
i meant hang as in turn the cake pan upside down like how u would do to a chiffon cake so that it doesnt collapse.

Sonia/cherry potato,
Thanks for your kind words. I'm glad the cake was well received and I actually put a smile on my kids' faces, even my 18 months toddler :)

SL,
I baked in my usual 8" round aluminium pan. I do not grease and line as this is a chiffon cake. Yes, I do invert the cake after baking to cool down to room temperature before unmoulding. Hths.

Agree with the rest, most important the taste good and made everyone happy to enjoy it.

hahaha... I almost die laughing when I read the word " collapsed " I was imagining myself cutting a cake that I've bake that collapsed even before I cut it ! hahahahahaha

hi sis,,,,would like to know,,what pan u using for these chiffon cake,,,do i need to used a tube pan or normal,,hope u done mind n share,,,,thanks

DG, thanks for your kind words.

FT Housefly, thanks for dropping by my blog. Was your cake underbaked, that's why it collapsed? My first cake was overbaked and thus it stays "beautifully" kekeke!

Anonymous, I always bake in my 8" round pan. BTW, please leave your name/nick as I would like to know who I am talking to.

I used to cut the canned fruits into smaller pieces and drained out the juice. So far, I don't have the problem of 'collapsing' when cut. I like the design on top.

Good idea to cut them smaller. I actually flood the whole cake with canned fruits as I was trying to minimise using cream :P

Thanks for your kind words.