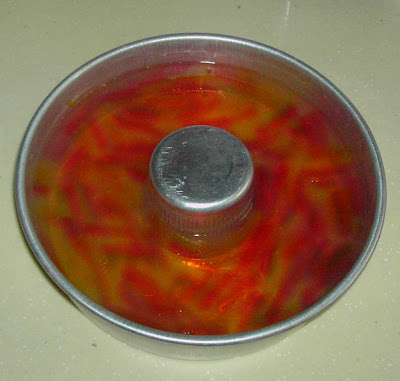 In addition to the chocolate banana cake, I made some agar agar for the gathering too. I had wanted to make a rainbow agar agar but after doing 4 layers, I still have 2/3 agar agar mixture in my pot and I was running short of time. I need to leave home in an hour's time and I'm sure I won't have enough time to complete this. I left the agar agar to set and cut them into shreds. Then I poured the balance 2/3 agar agar mixture into the mould with the shredded agar agar and sent it into the fridge to set. 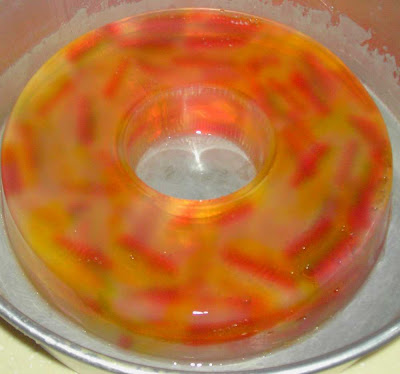 You may be able to see some rainbow effect here, not very obvious though. 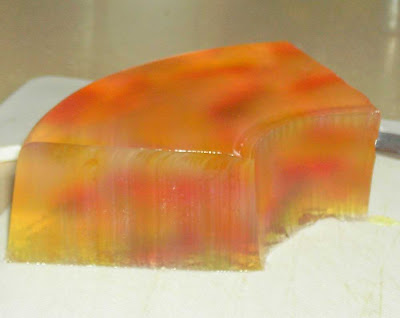 I don't know what to call this but I thought it looks a bit like batik cloth so I'm just going to call it batik agar agar :P

Notes for rainbow agar agar
If the layer gets too hard, the next layer will not stick. You can simply use a fork to lightly scratch the surface before adding the next layer.

Posted by Blessed Homemaker at 4:14 PM

This is really good! I had so much of this that my MIL kept looking at me everything I put my hand out for more.. ;-p

it's been quite long since i last made this agar-agar. we call this magic mirror.

Hi Delia, thanks for dropping by my blog. Magic mirror sounds cool!

May I suggest u put in some coconut milk or evaporated milk into the main agar mixture.
My cousins made this before, and the colour really came out well amongst the white background.

Thanks for your suggestion. I'm sure a white base will bring out the colours of the shredded agar agar but I started off wanting to make a rainbow agar agar. Will definitely use a white base next time :)

thank you sooo much u saved my life from the horrible home ec teacher. thank you