10 years today, I became a mother.  The night before, we were watching a movie on TV back home, in a very relaxed environment.  I thought I felt some contractions, but the pain wasn't too intense so I brushed it off as a false alarm.  We went to bed after the show and I found myself awaken by the pain in my belly and lower back.  Took a shower and got all my things ready, I woke DH up.  As it was in the wee hours, traffic was smooth and we got to the hospital within 25 mins.  The nurse asked if I needed a wheelchair which I gladly declined.  However, the walk from the lobby to the lift seemed to take ages.  I walked and paused to catch a breather when the contractions came.  Nevertheless, I made it to the labour ward without much effort.  After a check, I was only dilated 3cm so the nurse gave me a pethidine jab and I went to sleep.  I woke up a few hours later and found myself in intense pain.  The nurses offered me Entonox but I found it to be useless (I later found out it was because I didn't inhale the gas correctly).  The doc was called and she arrived within 10mins (we always grumble gynaes earn big bucks but they work odd hours too.  So let's not be too hard on them).  I was in too much labour pain that I didn't even know my doc performed an episiotomy on me.  I only found out about it when she was stitching me up hahaha

The baby was out in 4 pushes and I'm thankful my labour pain was a mere 4 hours from the time I woke up to the time I delivered.  I delivered without any epidurals too.  My doc praised me for being such a brave girl and I felt proud of myself.  I think the words of encouragement do help a new mother feel good about herself.

Now back to the cake.  I've not maked a layered cake for a long time.  My plan was to make a non-baked marshmallow cake to ease my job.  But DD1 specifically asked for a gummy bear with matcha/green tea cake.  I spent some time on the internet, trying to get ideas.  Honestly, my thought of a gummy + matcha cake sounds weird.  Nevertheless, I tried my best to fulfil and came out with this cake.

First, I did the gummy candy, recipe can be found here.  Then I went on to bake 2 cakes, one matcha flavour and one chocolate, just so I could have the contrast colour when the cake is cut.  I was debating between a matcha mousse or a chocolate mousse.  Birthday girl wanted a matcha flavour, so the answer is obvious. 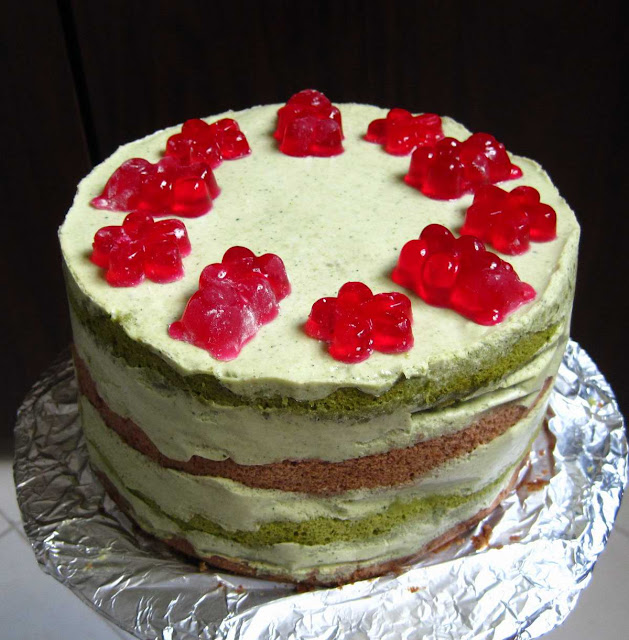 I don't own a cake ring and I don't intend to get one as I'm running out of shelf space.  I made do with DIY cake ring and I'm glad with the final result. 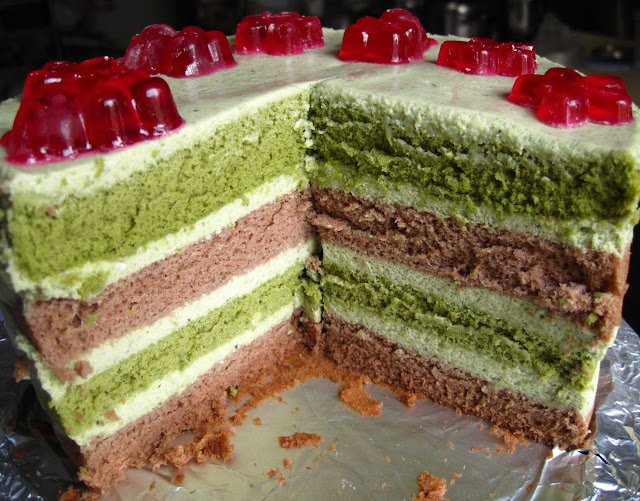 This is the first time I made such a tall cake with 8 layers!  It was a challenge but I'm glad the cake turned out well. 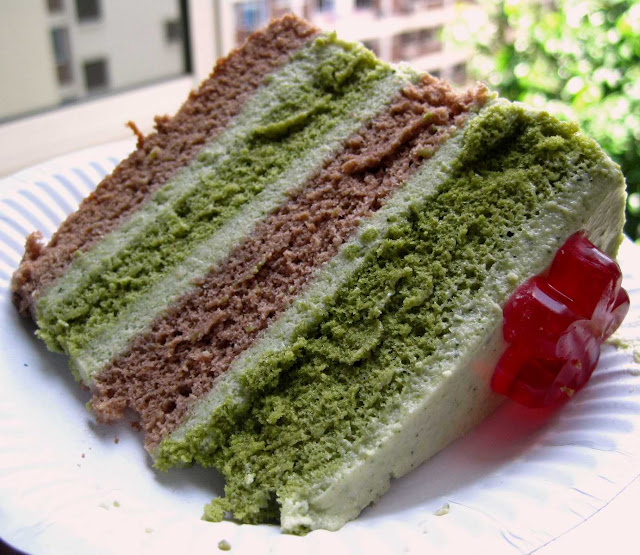 I'm happy because my child is happy :-)

I've seen this recipe in Kitchen Capers, by Gina back in 2006.  I didn't get a chance to make it as I don't have any proper molds.  With a new Daiso around my neighbourhood, I finally bought some chocolate molds.  DD1 specially asked for a gummy bear cake.  We recently bought a big pack of Yummy Earth Organic Gummy but I thought it is a good opportunity for me to DIY instead of using store-bought. 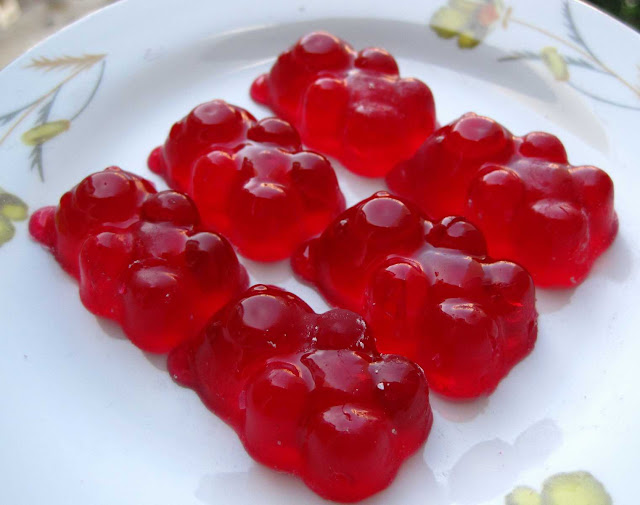 Look how cute these bears are.  But they are slightly too big for gummies. 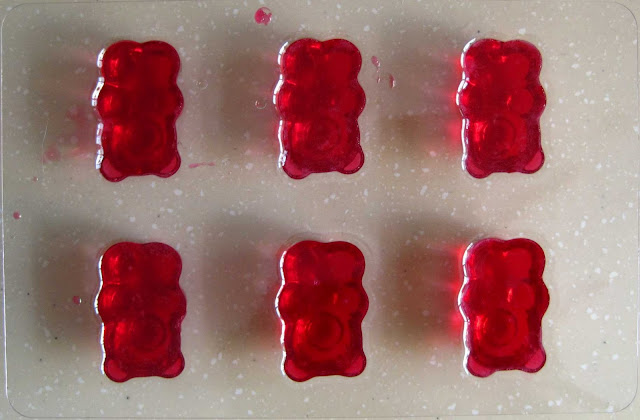 The mold comes in 6-in-1.  I bought 2 moulds and there were some extras. 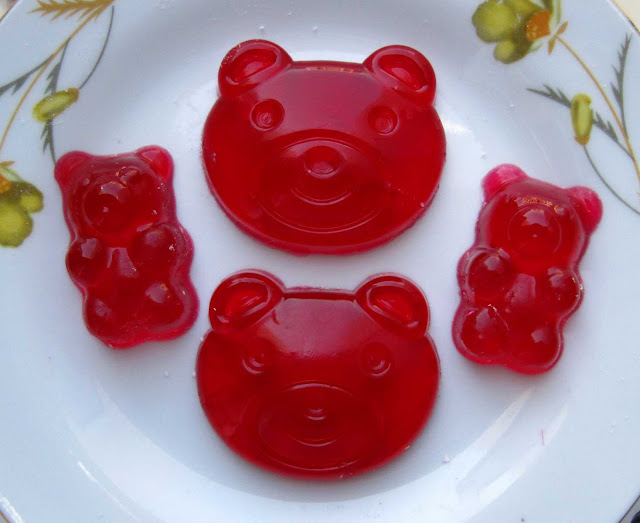 So the balance went into my egg mold and some flower mold. 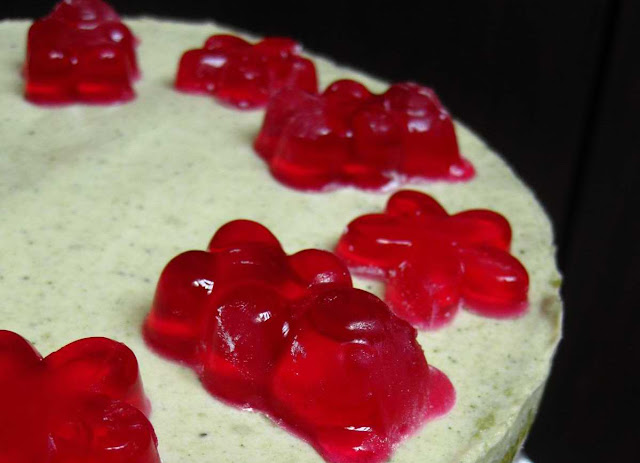 The final product went onto DD1's birthday cake which I'll blog about another day.

If you were to ask me, they don't taste anything like the commercial gummies.  But it is a quick and easy treat that you can whip up anytime at home without running to the stores.

Back in March 2010, my sis got me some vanilla beans from Indonesia.  Then, DH's ex-collg gave me some from NZ.  I googled for ways to make vanilla extract but had been procrastinating and no action was made.  After more than a year, I finally dump some beans into my sugar jar to make vanilla sugar.  How silly, I should have done that much earlier.  Now, how difficult is it to throw in 2 beans into a sugar jar? 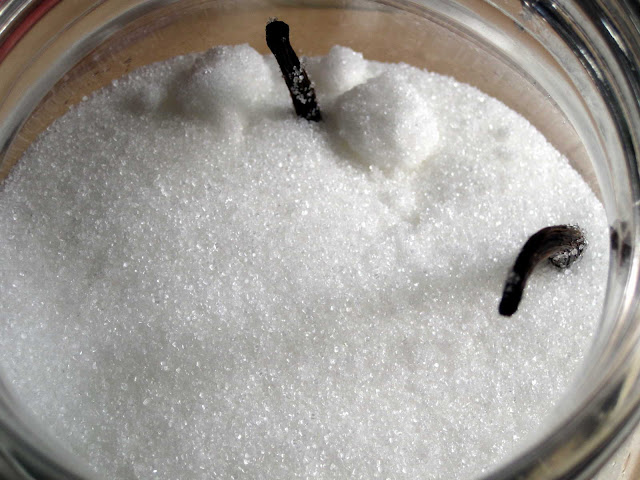 If you are like me, either too lazy or no time to sterilize bottles to make your own extract, try making your own vanilla sugar first.  At least you've taken the first baby step ;-)
Posted by Blessed Homemaker at 11:37 AM 4 comments:

How to grow basil from cuttings

Some years back, I've tried growing rosemary, thyme and dill but they didn't survive.  I didn't read up on how to take care of these herbs, thus overwatering and causing the roots to rot.  I concluded I do not have green fingers and never attempted herbs growing again.

Until a few weeks ago, my lovely neighbour gave me some of her herbs cuttings (actually, they came with roots).  Unfortunately, the thyme didn't make it :-( 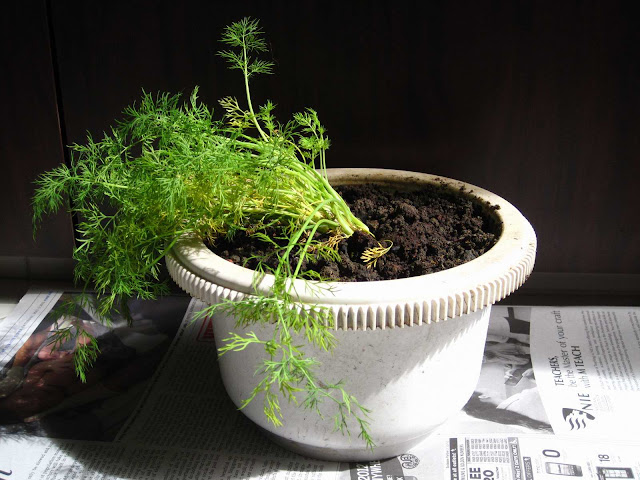 A few days later, she bought me a pot of dill.  I repotted but look what happened after 3 days :-( 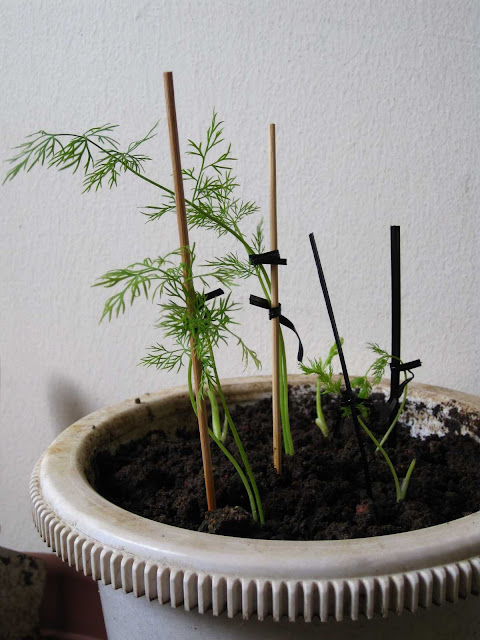 I trimmed off the wilted portion, hoping to salvage the situation.  Another unsuccessful effort.  Probably too much water as one morning, when I was about to water my plants, I saw some of my pots were wet.  Apparently, neighbour's maid been watering my plants too, with her excess water from watering their own.

Early this month, I saw some herbs being sold in the local supermarket near home.  There were sage, rosemary, thyme and sweet basil.  I've not read up on sage so I decided not to buy that.  The thyme on sale doesn't look fresh and I reckon it probably won't survive repotting.  It's now between rosemary or basil.  Prior to this, I've googled and read up on growing herbs from cuttings.  Although it looks easy with rosemary, I didn't have much luck in my previous attempt.  Basil seems easier as you can soak the stem in water for 1-2 weeks and roots will grow. 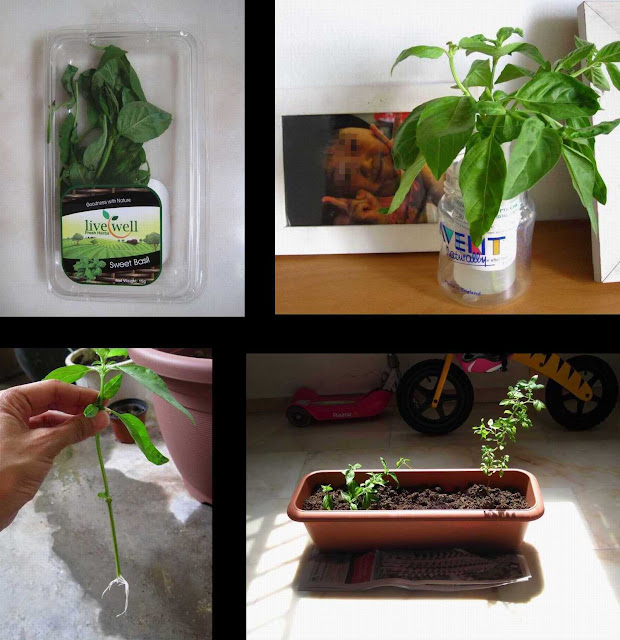 It took only 5 days for the roots to grow.  I transferred them to a pot of soil and diligently bring them into the house every morning to get more sunlight.  So if you do see some fresh basil on sale in your supermarket, you might want to consider growing some yourself :-)
Posted by Blessed Homemaker at 10:34 AM 1 comment:

How to grow spring onions


How many of you always end up with a bunch of wilted spring onions in your fridge because you were using too little?  I do.  Getting a bundle from the local supermarket costs me S$0.70 but I usually use only a stalk or two.  The rest goes into the bin after a few days.

I've tried growing my own, with shallots/small onions.  However, when the spring onion grows taller each day, they couldn't withstand the wind.  So I experimented with big red onions.

Use sprouted onions for potting, they grow faster.

Simply dig a hole in a pot of soil and cover the bulb.  Water daily with exposure to some sunlight.  In a few weeks time, you will have your own home-grown spring onion. 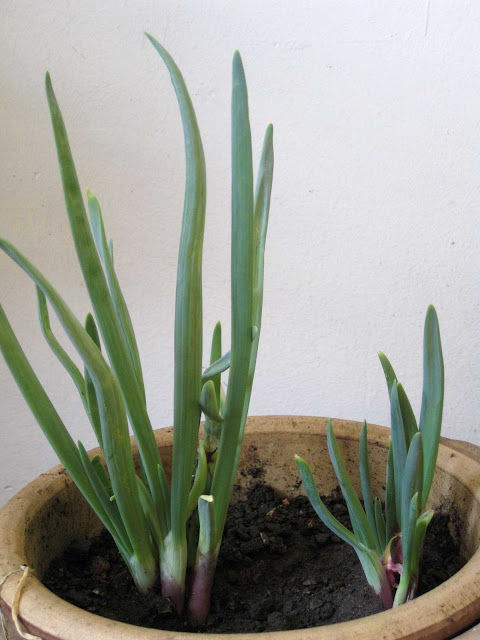