When it comes to birthdays, my brain cells will go into a devastated mood as there are simply too many choices and I always cannot make up my mind on the selections. Yes, call me flicker minded :P

I've always wanted to make a matcha tiramisu cake but DS2 wanted a clown cake after flipping through my Wilton Cake Decorating Beginner's Guide. When he saw the fish cake was decorated with lots of candies, he changed his mind. I was surfing on the internet for more ideas (actually, I was looking for the easiest cake decoration) and saw a dinosaur cake which look really simple but it's a huge cake. With a child (and his mother) that's constantly changing his mind, I decided to give him a "suprise" cake. I had the intention to make a smiley cake for him, for I thought it looked simple enough for me to try out. Just 2 days ago, I casually mentioned about it but he doesn't seem excited and gave me a "HUH, smiley face cake?" look. Looks like I'm back to the starting point again.

His birthday is this coming Sunday but since we'll be going over to my inlaws for dinner tonight, I decided to have the celebration there (with 3 more adults and 2 children to finish up the cake :P).

Anyway, I have decided to try using dairy whipping cream this time round instead of the usual non dairy. I thought it's "healthier" since there are no chemicals added. At this point in time, I'm still clueless on the design for the cake.

Baked the cake yesterday and after ransacking my fridge, found a pack of gummy bears sitting in the fridge for the longest time but still within expiry date. I decided to make do with whatever junks I can find in my fridge (good time to clear them out :P)

The dairy cream didn't whip up as much as non dairy cream. I didn't measure how much I used but simply poured out 1/3 portion from the carton. Added some icing sugar to taste and whipped till stiff. 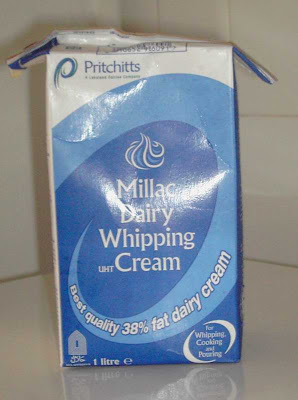 There are other brands of dairy whipping cream but I bought this with 38% fat to try out. A bit creamy for me but will see how it goes with the cake.

Using the same chiffon cake base, I baked them in 2 pans, one for DS2 cake cutting tonight and another for his form teacher (for Teachers Day). 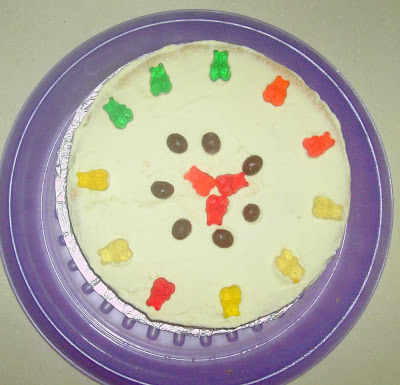 Since this is going to be a kiddie cake, I got the kids to help decorate it. They were thrilled! However, there were some argument among the siblings and things turned sour. But of course, they make peace within seconds and were busy decorating the cake again. This is their masterpiece, though there is nothing to shout about, the kids are happy with their creation. 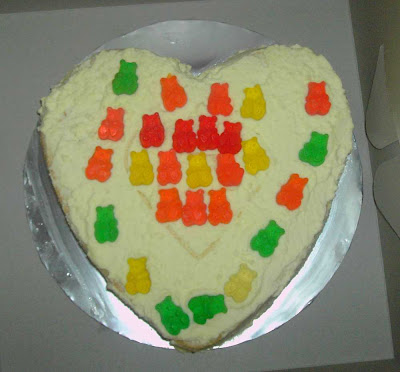 This cake is for DS2's form teacher. I do not have enough whipped cream so I poured out a small portion of it and started whipping. When I was almost ready to turn off the mixer, the whipped cream curdled! I've over-whipped the cream within a few seconds! Argh!! Really mad with myself. I thought of swapping the cake, ie the round cake for the teacher but DS2 doesn't want a heart shaped cake as he thought it was girlish. I have no choice but to be thick-skinned and give his teacher this cake, I hope she doesn't mind the ugly cake :P

It's time to decorate the cake for his teacher. DS2 helped to layer the sliced canned peaches (he did this all by himself, with minimal help from me) in between the cake layers. He wanted to decorate the gummies within a heart so I took out my biggest cookie cutter and did a stamp chop on the cake to assist him. After that, he added a border all around. When he's done, he looked very pleased with himself but sulked for a moment. He said his teacher's cake looks better than his birthday cake. My guess is this cake is loaded with more gummy bears. 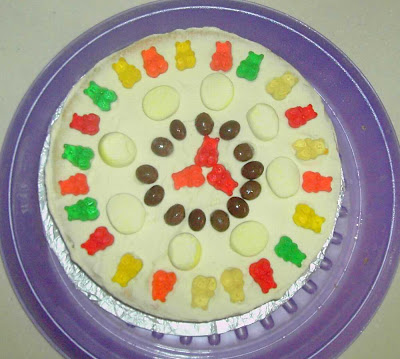 After sending off DS2 to school this morning, I touched up his cake a little by adding more gummies and chocolates. Found a pack of marshmallows sitting right at the back of the fridge and decided to use them too. When DS2 saw his cake this afternoon, he looked satisfied and commented that his cake is better than his teacher's now. Oh, kids.... 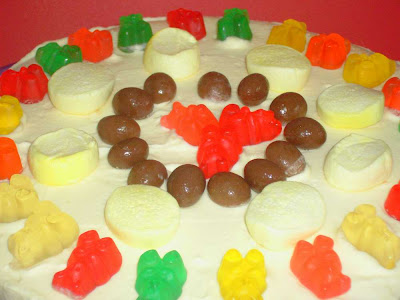 I'll be back to update on the cake after slicing it tonight.

Posted by Blessed Homemaker at 11:13 AM