S tried to bake chiffon cakes on 2 occassion but failed. I told her I'll drop by her place one day to return her the exersaucer and to teach her how to bake a chiffon. Alright, I must admit I'm no expert here but since I've been pretty lucky with my chiffon baking, I thought I could show her how to whisk the egg whites. Instead of getting S to watch me, it's better for her to have a hands-on while I watched. 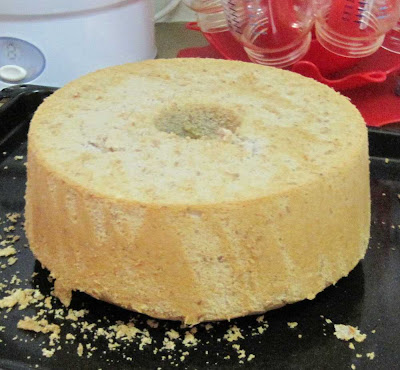 This was made by S, with some hiccups and "yelling" from me but overall, she did well :) 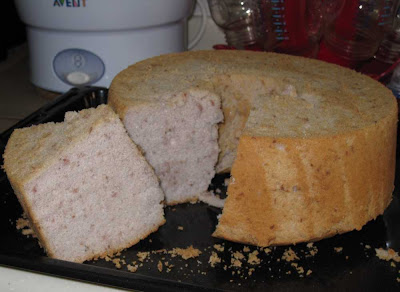 Again, we used the trusted banana chiffon cake recipe and modified it using strawberry puree instead. We didn't add any strawberry emulco as we don't like adding additional chemicals into our bakes. The cake is mildly pink but it's good enough for us.

As S was using a 23cm chiffon cake pan, we increased the recipe to 6 egg yolks and 7 egg whites instead.

Posted by Blessed Homemaker at 12:15 AM

S made another batch 2 days later and succeeded :)