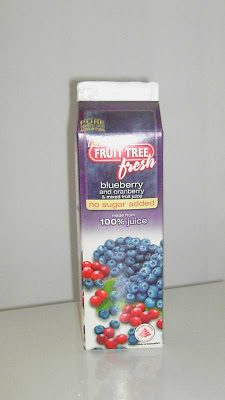 This was on offer and since DH asked for it upon seeing it on TV commercial, I bought 2 packs from the store. With some frozen blueberries, I attempted a mixed berries chiffon cake with this juice.

I reduced the sugar slightly since the juice is already sweentened. While whisking the egg whites, I got distracted and the whites were slightly over-whipped as they had somehow curdled but there was another 1/3 portion of sugar not added in yet. Turned my mixer to the lowest speed to incorporate the balance sugar. When I folded in the flour mixture, they don't mix well due to the curdled egg whites. I just had to keep my fingers crossed that the cake will turn out fine. 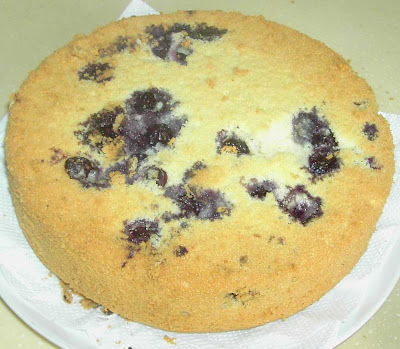 Upon unmoulding, this is what I get. Such a disappointing sight. The berries had all sunken to the bottom. Could it be due to the fact that I've used frozen berries instead of fresh ones? My cheese chiffon cake wth fresh blueberries turned out well using fresh berries.

I still remember Sister E commenting on my fried fish at my parents. She said given her, she'll probably throw the fish away but I still had the cheek to post in my blog. Told her this blog is not about my success stories but also to share my failures. Maybe some experts out there after reading my blog may give me some advices on how to fry the perfert fish ;-)

Back to this chiffon cake, although the egg whites were over whipped, the cake still turned out soft and fluffy, just slightly shorter. 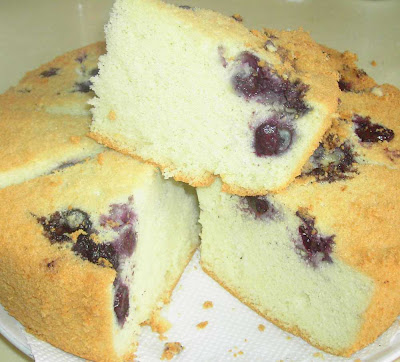 If you are game enough to try this, I suggest you use fresh berries instead of frozen ones.

Posted by Blessed Homemaker at 10:38 AM

I used the same blueberry juice for my chiffon cake too ;)

I agree with you - why need to hide the failures if others can learn from it?

Most definitely ! We all learn through failurs and I've had my fair share of it :P