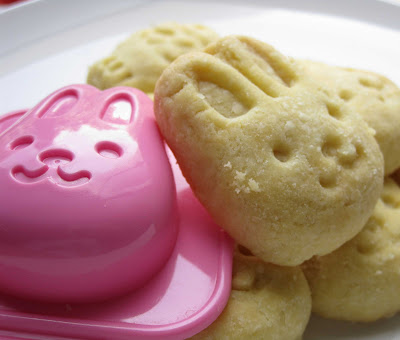 I promised SM I'll bake her some pineapple tarts after CNY.  Decided to give this recipe a try again, praying that they won't puff up as much.  I remember reading somewhere that to prevent the cookie dough from spreading too much in the oven, the trick is to chill the dough first.  So when I did this batch, I chilled the dough (wrapped and shaped, ready to be baked) in the fridge and only took it out when the oven is ready.  They turned out well, slightly puffed but at least the imprint is still pretty obvious.  I'm contented :-)

For melt in the mouth recipes, the success factor is how you handle the dough. Be careful not to overwork the dough. I used a fork to mash the butter into the flour instead of using my fingers. And I mixed in all the wet ingredients together before pouring into the flour mixture so that I really minimise "kneading" the dough. 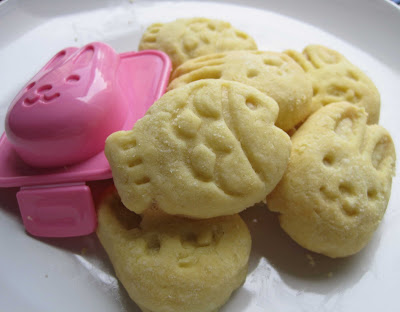 Decided to do away with egg wash since they always turned out patchy.  I guess I'm not using the correct pastry brush. 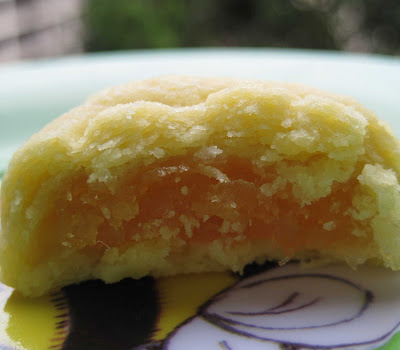 Can you see the flakey crust?  Oh, I just love this recipe!  But be warned, this recipe comes with a high percentage of butter over flour so watch out for those calories when you pop one into your mouth.

SM took one while she was in the car, took a quick bite when the traffic light turned red, and she loves it.  Her son NQ was so amazed as he has never seen pineapple tarts in this form.  He was showing off to his neighbours that his friend's (my son) mother made these.  I owe EO (my best pal's sister) some pineapple tarts so passed her a bottle and received positive feedback from her too :-)

the tarts look so cute and yummy! i love pineapple tarts! (:

The pineapple tarts are so cute and pretty with the bunny mold. I must try to use the mold next year :)

oh Dear, this is too cute! Can see the pastry is beautiful! May I ask Where can I get the rabbit mould? Thanks.

i love pienapple tarts
yours is sooo cute :)

The tarts look so cute.
I use a Chinese calliraphy brush to do egg wash. Maybe you can try that.

wow!! those are the cutest pineapple tarts ever. Did you use egg molds? Sounds delicious. Btw, how's your daughter doing now?

where did you purchase those cute moulds?

Bunny tarts! Perfect for Easter too!

the bunnies are so cute! the pastry texture is really beautiful!

Look really good! must bring some for our next meeting na!

Hi Blessed Homemaker,
I've a packet of store-bought pineapple paste left after baking the pineapple tart for CNY. I'm quite reluctant to use this packet as it is quite sour. I would like to sweeten it, and hope that you can advise me on how to improvise. Thank you.

What a great idea to use the quail eggs mould to make the tart! I love the bunny design! My said he wanted some, too!!!

They are so cute and surely taste yummy..

Timely for Easter too!

Wow it looks too good to b eaten! May I know where u bought the cute moulds? :)

Yum! I've never heard of these before and I've got way too much pineapple in my fridge! I love the cute shapes, too :)

Thanks all for your kind words, pls pardon me for not replying to every single one of you.

Honey Boy,
These were bought through a friend, from Japan. It's an egg mould actually.

Wendy,
You're using the normal chinese calligraphy brush? I was tempted to buy that when I was at the stationery shop.

Esther,
Yes, these are egg moulds. And thanks for asking, DD3's recovering well. Brought her to see a doc for her cough and asked the doc if she needed to apply some anti-scar cream. I'm assured that this part of the skin heals extremely fast so I can just leave it.

Irene,
Shouldn't be a problem but must give me ample notice, else not enough time to make :P

Eileen,
If you find the paste too sour, you may add in more sugar to suit your taste. I added some water and butter to cook together.

Tricia,
These are not quail egg moulds. They are quite big, I think can fit a 80g egg.