I saw HHB's Deli-cious post and was reminded that I've made a similar sandwich for our dinner just a few nights ago.  It's a great idea to pair off SPAM turkey with mushrooms but I did mine with honey baked ham and bacon instead. 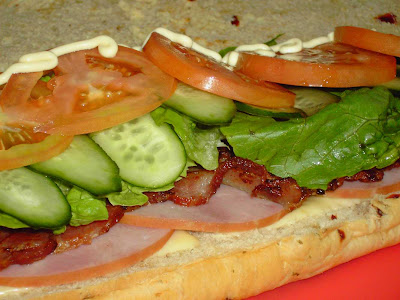 As it was another of my lazy days, I didn't bother to bake the bread but used Gardenia focaccia bread.  I used to eat alot of focaccia bread when I was working but this is the first time I introduced it to my kids and I'm glad they like it :)

I do not like to feed my children with too much processed food but since it's only once in a blue moon, I don't see much harm done.  Also, it beats eating deep fried stuff :P 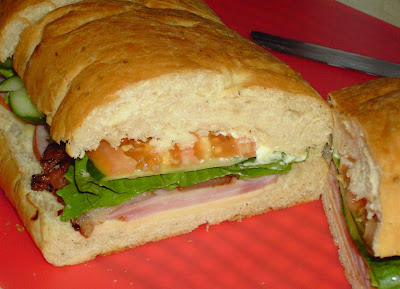 The bread was sliced into half, topped with some slices of cheese, ham and bacon (pan-fried till slightly charred) and I popped them into the oven for a few mins to crisp the crust.  Next I added butterhead lettuce, japanese cucumber and tomatoes.  Finished it off with tomato ketchup/chilli sauce and mayonnaise.  Yum!

Posted by Blessed Homemaker at 9:38 AM

Yum, yum!!!
Sometimes I can't help but to feed my kids with ham and sausages as these are so convenient to prepare.

HHB, me too! But I always brainwash myself that they are fed with proper food most of the time so occassional indulgence in processed food is OK :P

Wow! This looks healthier and tastier than a Subway sandwich ~ Moon ^^

LOL! Here goes another SPAM sandwich! Dear, I think this is gonna be another food blogosphere fever!

Ms Moon, thanks for your kind words.

Pei-Lin, hahaha!! I wonder what's the next food blogosphere fever?