If you have been following my blog, you know I don't bake cookies and tarts/pies that often. I find it very time consuming to bake a tart/pie, ie prepare the crust, chill the dough, blind-baking, leave to cool, prepare fillings and bake again. Since I have another bunch of bananas untouched, I attempted Annie's Banana Cream Pie since there's only one baking to be done. 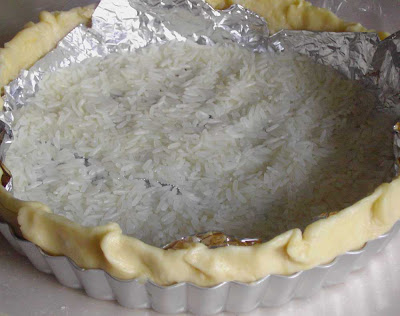 I do not have shortening so I used butter instead. The dough was relatively soft and sticky, which was quite difficult to work with but after chilling in the fridge for an hour, it was manageable. 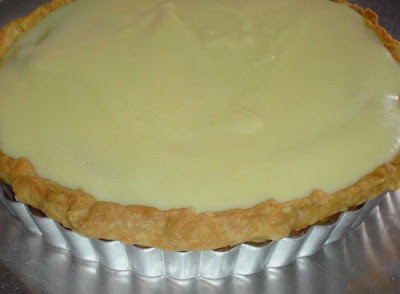 Cooking of the pudding was relatively easy too, just remember not to overheat the milk mixture, else you will end up with curdled eggs. Also, I added 1 tsp of lemon juice into the pudding, hoping that it will help to keep the bananas from turning brown (oxidation). 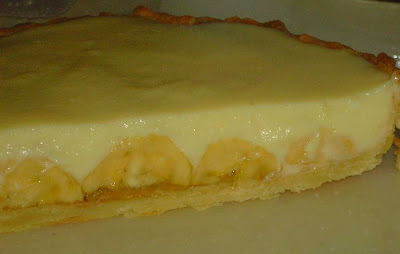 The crust was flaking despite the usage of butter, but after chilling in the fridge overnight, the crust turned soft. I thought the pudding compliments the bananas but unfortunately no one except me like this pie so I won't be making this again for my family. Do give this recipe a try if you like pies/tarts.

I'm too lazy to making pie..

I came across your steam moist choc cake posted on 31st July.It looks yummylicious. Can u pls advise what type/brand of chocolate do u use for making the ganache? Thank you.

Sonia,
Me too but this one only needs to bake once so still not too bad ;-)

your pie looks delicious -- the custard is so smooth. But where's the cream?

Sorry to hear your family didn't like it. Maybe you can try again in a year and see if it grew on them!

Thanks for the link back!

Why are there rice in the pie crust ??? Puzzled ??? I'm a failure at baking and I really admire your talent of being able to bake so well and at the same time caring for 3 kids.

Nate and Annie,
I ran out of cream so I omit that :P Will definitely make this again when the kids are older. Thanks again for the recipe.

FT Housefly,
The rice were used as pie weights to help the crust keep it's shape when baking. You may use beans or any other "heavy" grains.