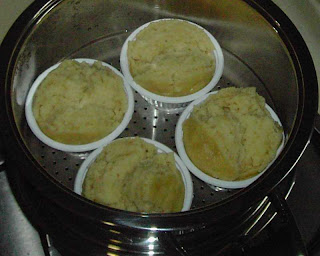 Sister E deliberately took measurements for me when she made Fa Gao last Saturday since my Fa Gao making hasn't been very successful. I decided to give it another try and I must say it's so much better than my previous attempts. However, the texture is still quite dense. Is Fa Gao supposed to be dense? I have no idea as I don't like Fa Gao and I've not eaten this for a long time.

I was supposed to make a cross on the batter before putting them into the steamer but I was way too excited and forgot this step. Nevertheless, the Fa Gao did bloom :)

Method
Posted by Blessed Homemaker at 1:59 AM