Sister E wanted to finish up her expiring matcha and gave me an idea to add matcha into steamed sponge cake. I made this yesterday since Sister E came by in the afternoon to help me out for a few hours as DH was still in Philippines. 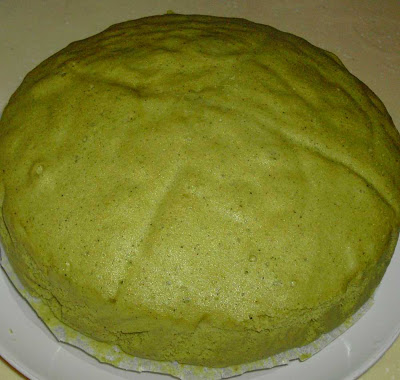 The batter was rather thick after adding the flour. I should have reduced the flour accordingly since I've added in 5 teaspoon of matcha. Instead of sprinkling sugar to make the cross, I used a chopstick dipped into oil and "cut" the batter prior to baking. It didn't work hahaha!

Everytime I make this, I replaced hong kong flour with cake flour. But I got slightly adventurous and decided to use plain flour instead. I sifted the flour 3 times before mixing into the beaten eggs, hoping that it will turn out soft and fluffy. 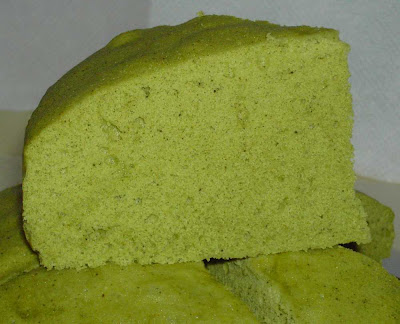 The cake was soft but not exactly fluffy (then again, I've bought some from stalls with such texture too). I suspect it was due to the addition of matcha or probably my weighing scale has gone bonkers (I'm using a cheap kitchen scale) and I've added more flour then needed. For my family, they ain't fussy eaters so they don't mind this texture ;-)

Posted by Blessed Homemaker at 11:49 PM

I m the first come to taste your matcha sponge cake, so special! Will try this out in one day.Thanks for sharing the recipe.

The color of the cake is so lovely! May I know where can I buy Matcha powder?

Bread looks nice and fluffy to me , your kids are so lucky as they get to taste nice bread from their mummy :D

The cake looks yummy, and I will give it try for sure :)

Evy,
My matcha is from a Japanese friend but I understand you can get good quality ones from Meidi-Ya and some bloggers mentioned they bought from NTUC/Cold Storage.

FT Housefly,
Thanks. Your kids are lucky too :)

DG,
Let me know how this turns out for you if you try it.

i love to try this recipe.Looks yummy and soft.

My cake wasn't fluffy enough. Do let me how how yours turn out if you were to make this.

hi,,,may i know can i subsitute matcha with coco or others,,hope u con mind to share,,thanks

I'm not too sure for I know chocolate cake needs baking soda, else you'll end up with a sourish cake.

Finally I got chance to make it. Steamed into cupcakes, It is delicious and soft. Thanks for sharing the recipe :)

Hi, Matcha, is it stated Matcha at the package?

can i add red beans?

DG, glad it turned out well for you :)

Ean, it should be in Japanese, but I think there may be some chinese characters of 抹茶. I'm not sure about adding red beans to this recipe though.

Hi do you make aagain?fluffy?shall I reduce the flour?

i have to reduce the flour to how many?

Sorry I missed your question. I didn't make this again. You may want to try the original recipe first before tweaking the recipe to suit your own needs.