When I was working in Jurong, I used to frequent Provence for I love their Chocolate Wassant. When I saw Florence's recipe, my hands itched to make them. However, I wasn't confident then as it uses 65C tang zhong starter. Last week, I made my very first 65C tang zhong bread but I thought the texture was only alright, nothing really fantastic. I'm definitely not doubting her recipe but I do suspect I may not have cooked the roux starter correctly.

Feeling adventurous, I made the chocolate paste last night and kept it in the fridge overnight. It was still very soft this morning so I left the paste in the freezer to harden it up. I knew instantly I've undercooked the paste. 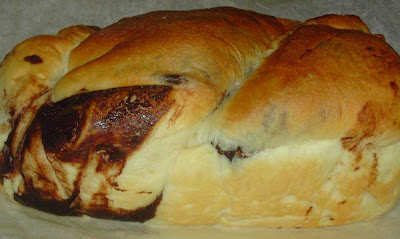 I used my milk loaf recipe to make this. When the bread dough has completed it's first proof, I was contemplating if I should still make the wassant as I was worried the paste will come oozing out when I roll the dough. I followed Florence's steps to fold the dough but baked it in a loaf instead. 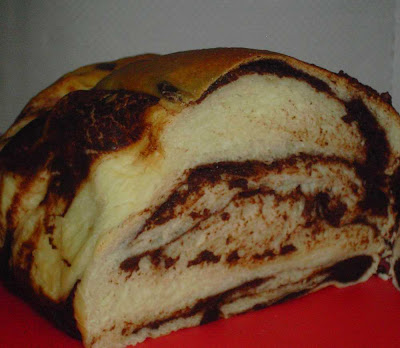 I wasn't expecting a nice swirl as I used quite a big portion of bread dough for this, simply because I was worried of the paste oozing out :P 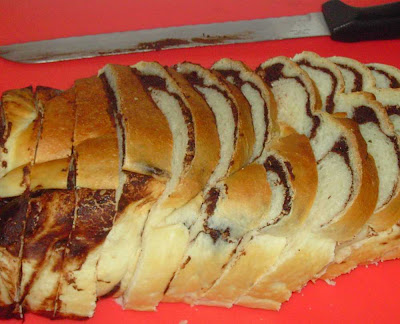 Though I've used my regular milk loaf recipe which is supposed to be soft, it didn't go well with the chocolate paste. Also, the bread didn't turn out soft like my previous attempts. Could I have under-kneaded the dough? The bread texture is chewy and sticky, nothing like what I've baked previously. Also, the chocolate paste doesn't taste right too. All in all, this bread tasted horrible (my kids won't eat them) and I wonder what could have gone wrong. Maybe the paste tasted weird because it's undercooked? I'm now in a dilemma if I should give the original recipe a go instead as I worry if the chocolate paste is still going to taste the same, I'll have to dump the whole loaf into the bin.

Disclaimer:I'm not saying the recipe is no good but I just couldn't get good results from it. Many bloggers/bakers have tried and gave thumbs up for this recipe. For those willing to give it a try, here's the recipe. Who knows, you may have better luck than me.