This is my first attempt in pineapple tarts making.  Sis E was supposed to pass me some of her cutters but there was no chance for a meetup.  My hands were itching to make some pineapple tarts so I decided to use my disney cutters to make them as closed tarts, somewhat similar to Taiwan's Pineapple Tarts (凤梨酥).
Choosing a recipe was tough as there are simply too many recipes online.  I could have asked my sisters for their recipes but I chose not to as Sis E bakes without a recipe (she can mix-and-match any leftovers and create her own recipe without any exact measurements for she cooks/bakes with her eyes).  To get recipe from Sis C will take weeks...  Anyway, I googled and shortlisted 2 recipes from the numerous, one from Delicious Asian Food and another from Florence's Do What I Like.  I was keen to try the first recipe as it is a mother-in-law's recipe (I always go for elderlies' trusted recipes) but 2 things deters me :- recipe uses 2 - 3 eggs and not in metric measurements.  Finally decided on Florence's as I was plain lazy (again) to do the conversion and prefer to use 1 egg yolk recipe.
I didn't bother to cook my own pineapple filling so I used store-bought.  As usual, my 2 older children wanted to help so I got them to help roll the pineapple fillings into balls.
DH is still on reservice and he was on duty last night when I made these.  I only had time to bake 1/2 the dough so I kept the balance dough in the fridge.  Weighing a total of 40g, these are hugemongous pineapple tarts :P 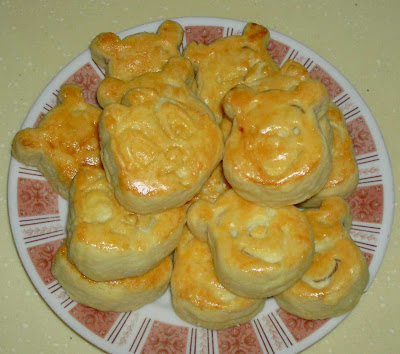 The imprints were obvious before baking but faded when they were out of the oven :-( 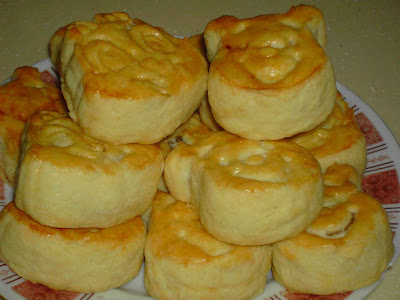 After my failed egg wash here, I added more water to the egg yolk but this time round, it was too diluted.  My egg wash failed again :P  Don't know why but I just can't seem to get it right.  Maybe I'll just give egg wash a miss since I've no luck with it. 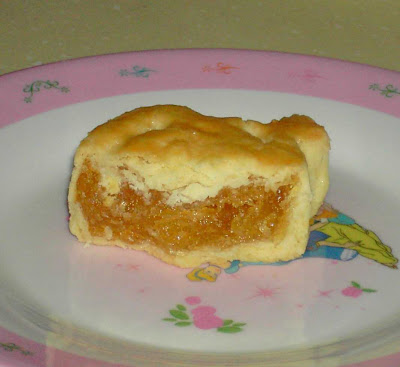 A cross-section of the tart loaded with pineapple filling.

Despite the ingredients used were all very basic, the pastry was relatively easy to handle and has a melt-in mouth texture.  This is definitely a keeper!

Posted by Blessed Homemaker at 11:32 PM

YOu know what?! I was having the same idea of making my pineapple tarts using the same disney moulds!! BUt, I'm stil waiting for the day to get closer to CNY before making them. YOU may wanna try making the dough without baking powder? cause baking powder will make the pastry rise nad there it fades the 'Faces' after baking. In fact I see many recipes didn't call for baking powder. It's just my opinions, hope you don't mind.:)

HB,
Great minds think alike ;-)
I was also thinking along that line to omit rising agent as many recipes don't use any. Anyway, I didn't bake these for CNY, more for home consumption. As these are huge, I limit to 1 pc per pax daily, else overdosed of pineapple tart!

Very creative to use the disney moulds for pineapple tarts :)

So cute:)
1 pc a day! Great! Kids should learn to ration.

I'm trying to instill that in my children too.

How about without egg wash? The design may be clearer (not sure, just guessing).

May I check if you using those ready-made pineapple filling or you prepared it yourself?

I've 1 pack of the pineapple filling from Phoon Huat, but not dare to use it yet scared the quality not as nice as home-made?
If really use it, do I need to do anything to it or can just straight away use it?

Sonia, thanks for your kind words.

Anncoo/Pei-Lin, when we are desperate to bake, we just have to make do with whatever we have ;-)

wendy, I think it's basic discipline I want to instill in my children as I've seen many pampered kids asking for the sky.

Angel, I just did another batch using the balance dough without egg wash and I think they look so much better.