This blogger, Happy Home Baking, has inspired many to bake and I'm one of them.  I must say she has a wonderful blog and all her bakes and cooks look fabulous!  Upon seeing her Santa Claus cake (the idea came from Japanese Meiji website with a self explanatory video demo on how to decorate the cake), I told myself I just have to make it one day.

Since Dad's birthday falls on 31 December and he's usually away for holiday this period, we usually have an early celebration for him.  This year, we celebrated his birthday at Bro J's house again.  My kids love such gatherings, and so do I.  The barbecue was great though I didn't get to eat much as DD3 was extremely clingy that day (she missed her afternoon nap). 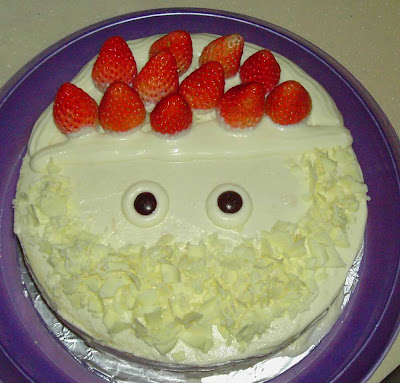 The only strawberries available from my nearest supermarket were from Korea and they ain't delicious red.  I had to pick out the darker coloured ones for this cake.

Frosting the cake was horrendous as I must have under-whipped the dairy cream and it was melting on me.  It was no easy feat shaving the chocolates too.  I tried HHB's method ie to use a plastic spoon (for dispensing medicine) but that didn't work.  I used my cookie scoop and peeler too but none worked.   I didn't want to waste too much time on that so I just scrapped and get bits and pieces here and there, just enough to use as Santa's beard. 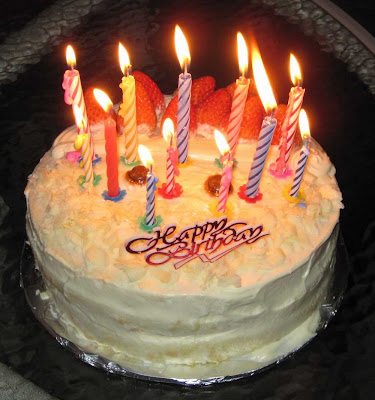 I did the decoration the night before and when I took it out to show my kids the next day, I realised the M&M chocolate melted on me too.  The eyes smudged!  Since I have some leftover whipping cream in the fridge, I tried to salvage the eye by removing the frosting and piped a new "eye".  Put new "pupils" onto them and it looked almost perfect.  But when we got to the venue, the chocolate smeared again! 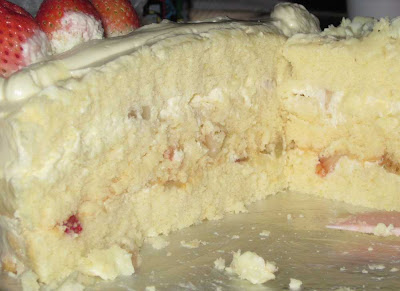 Using a chiffon cake base, I sandwiched the layers with some cream and diced strawberries.  I was "stingy" now and didn't add too much strawberries as my previous cakes were all loaded with fillings and the cake collapsed upon slicing.  Nevertheless, the cake was well received.  The only complaint from Dad was the strawberries came in odd numbers.  He wanted even numbers, not odd numbers....  So I just picked up 1 strawberry and popped it into my mouth and rearranged the balance 10 :P

Posted by Blessed Homemaker at 10:05 AM

This cake look lovely, I will bake this for my husband's birthday this year ..Thanks for sharing.

Happy & Healthy 2010 ! This cake is gorgeous , your family is so fortunate to have you.

Cute cake!
Hmm... did u add some gelatine mixture to the dairy cream to stabilise it?
Candies should only be added just before presentation, or at least one or 2 hours before, if not, they'd melt.
The chiffon base sure look good. I envy u can bake chiffons in regular pans........ Sigh.

Pearlyn,
Happy new year to you too! Thanks for your kind words.

Wendy,
I didn't add gelatin as my parents don't take beef. I'm still searching for fish based gelatin but I understand it's difficult to find them in Singapore. My gf bought from Msia before but I don't visit so abit tough....

Thanks for the advice on the candies.

There are lots of scratches in my pan now but I'm reluctant to throw as it's already very seasoned for baking chiffon. And I very much prefer the texture of chiffon over sponge. What's more, I can't seem to get sponge cake correctly :P

For non-beef origin gelatine - you can use the gelatin sheet. It is derived from pork bones, I think.

The sheet is better as I find it does not have the strange smell like the powder type.

You can easily get the sheets from PHuat.

I didn't know the sheets are using non beef ingredients. Let me go check it out. Thanks for letting me know.

Adding some beaten cream cheese to the whipped dairy cream also can do some stabilizing. Chill the mixture until prefered hardness before applying. It can get pretty solid when very cold.

Cool! Thanks for the tip!