If you've been following my  blog, you will know I like to involve my kids in my bakes, especially in pizza making as they can contribute so much.  They have been helping me out constantly, from household chores to cooking and baking.  In the kitchen, they are constantly seen plucking vegetables or removing roots of bean sprouts (they just love doing these).  When it comes to cake making, I refuse to use the electric mixer (unless I'm making chiffon cakes) and prefers to cream butter and sugar by using a wooden spoon.  And yes, the kids enjoyed that moment too.
Back to pizza making, they have been helping me all along, just that I didn't have a chance to take pictures of those precious moments.  But now, I finally did :-)
I usually assign simple tasks to them, thus minimal supervision is required. 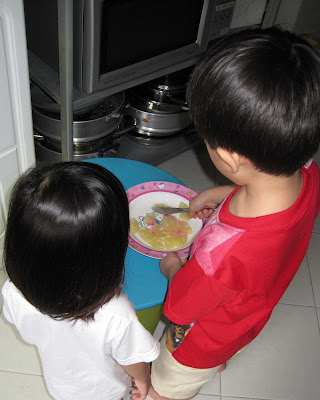 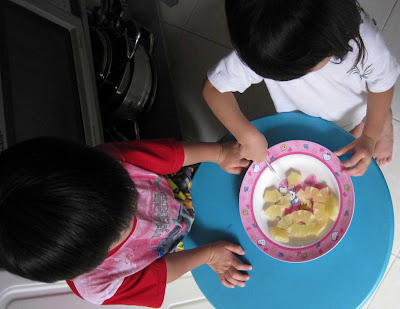 Now it is DD3's turn to try her hands on it, with her brother assisting her. 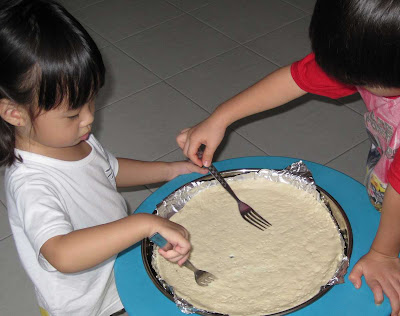 Poking the dough with fork, another simple yet enjoyable task for them. 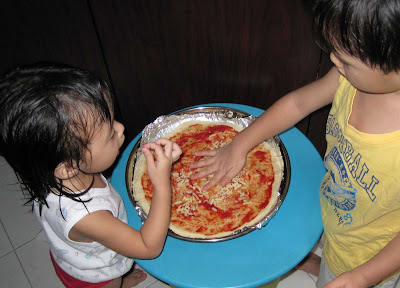 The kids went for their shower while I pre-baked the dough.  I helped them spread the tomato paste as the pan was still hot.  DD3 couldn't resist feeding herself some cheese in the process of helping.  And of course, her brother followed suit. 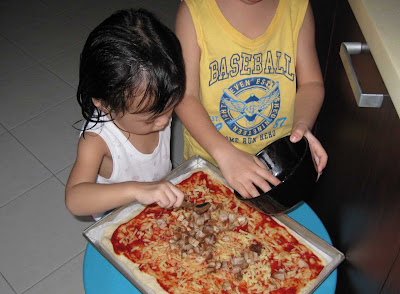 Spreading some sauteed mushrooms with a spoon but DS2 prefers to use his hand. 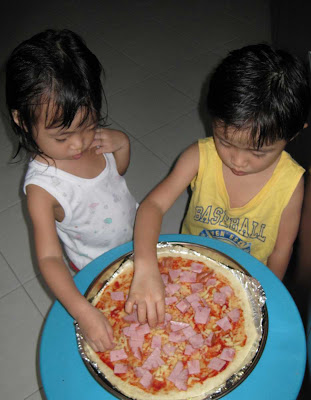 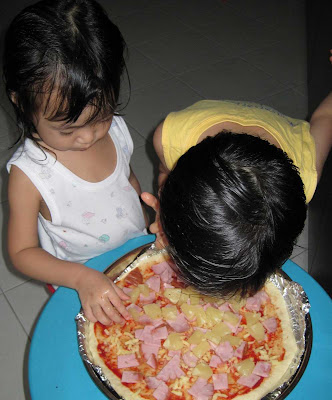 Told them no more pinching food else there'll be nothing left for their pizzas.  DS2 decided to smell the pineapple instead *eyes rolling* 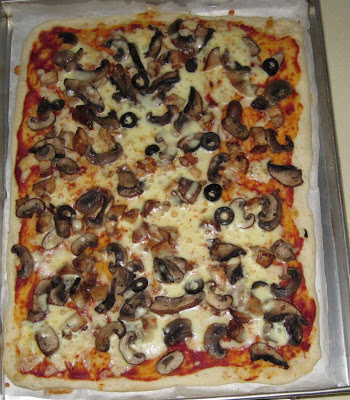 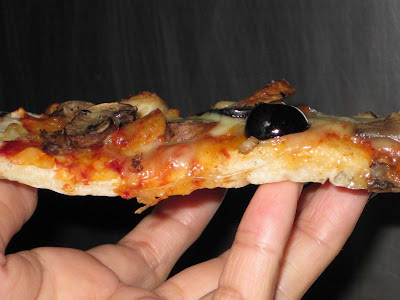 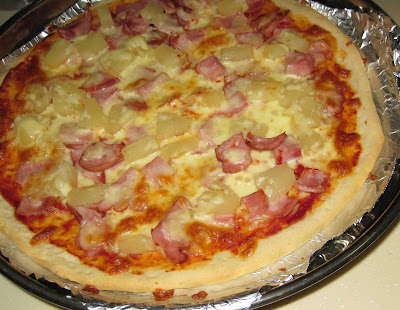 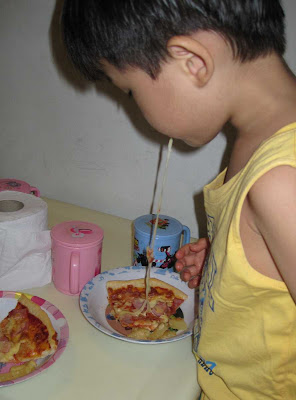 Check out the "cheese pull" effect!  Kids were thrilled to see this everytime they bite into it! 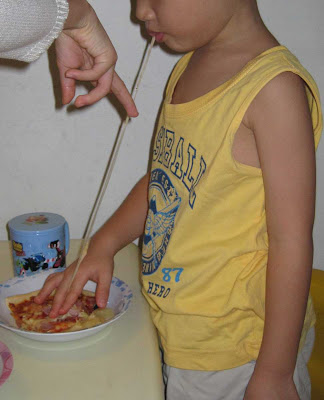 DD1 pretended to use her fingers to "cut" off the cheese. 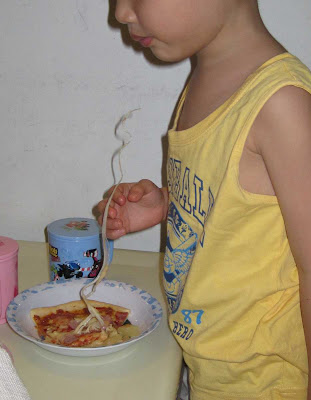 I managed to capture this shot!  He just bit off the cheese and it came falling down.


Method
Posted by Blessed Homemaker at 1:14 AM

what a great post-
Your little ones are so cute-

The cheese pull shot is amazing-

I also love to cook with my monkeys- They love to make pizza- We love to make mushroom pizza- Once of my monkeys will not eat mushrooms but they both like to cut them since they are so easy to cut.
Have a wonderful day!

it must b be fun to involve kids with baking but for me, most of the times I will be fuming if my dd trying to "help" me hahaha... the pizza looks so delicious!

We had pizza during the national day holidays too! It is good to be able to involve your kids in the kitchen. Now that they are still young, they have got more free time. Once they get to primary school or higher primary level, they have less and less time to do such things :(
btw, I made three pizzas, one Hawaiian (boring! but a must for the kids!), one with Bolognese meat sauce and a dessert version...spread nutella on the dough and cover top with banana slices and drizzle over with some nutella, yum!

So COOL! watching them step by step! haha

Your son is such a darling!!!
I'm waiting for the day my kids can bake or cook with me.

haha... you boy looks so PRO!!! it's so sweet to see kids making food in the kitchen. So heart warming and CUTE!

The pizza looks good. Reminds me that I have not had pizza for a long time.

This is such a good bonding session.

Ren,
Thanks! I'm glad I managed to capture the cheese pull shot with my idiot proof camera.

I guess we can't go wrong with pizza making.

Jess,
I know what you mean. I had my fair share of fumes then, hahaha! But as they work on it more often, they know what is expected of them so they improve.

HHB,
You are so right. I get feedback from friends with older kids (teenage) that they couldn't be bothered with their parents now. I hope that I can build a strong bonding with my kids since young and we can still be good friends when they are into adolescence. Fingers crossed.

Hawaiian is al all time favourite in my family too. I very much prefer the mushroom version.

The sweet version sounds interesting. I've done it with peanut butter and bananas on bread and kids love it. May try your Nutella version one day.

Wendy,
I'm sure your girls will be helping you out in the kitchen, as long as you allow them to.

Honey boy,
They are "season" helpers esp so in pizza making so they know what comes next :)

Angel,
In just a few more years, I foresee Lucius helping you out in the kitchen too.

Nice pic illustration. :D
Actually I was quite impressed that your kids lay out the ingredients so evenly and beautifully... without supervision!

Meldylocks and Her Three Bears said...

How I envy you with your "helpers"! My sons are more of "destroyers" than "helpers"... Maybe I'll have to wait til they are older. :)

it's great tht you got the kids involved with cooking. the pizzas look great and that must be the longest cheese pull i have every seen.

A friend recommended your blog to me. Cant believe that I know about your blog only now!!

So glad that you shared other recipe besides baking recipes. =) I am in need of recipes for 家常便饭！

Ronni,
Thanks for your kind words. Practice makes perfect, the 2 elder ones are quite used to helping out in pizza making so it's quite a simple task for them. It's the first time the youngest had her hands on it and all supervision done by her big brother :)

Meldylocks,
With young kids, we can't expect them to help without creating a mess. I've had my fair share back then. Just had to be patient and they will improve along the way.

Jo,
Thanks for dropping by. I believe it's the brand of mozzie cheese I used as I only get such cheese pull effect from this brand.

Would like to check with you, what ingredients did you use as the topping for both pizza? As for the black mushroom in the 1st pizza, what is the name and where can i find it?

So sorry for asking such questions. I am a real noob in cooking!

Reira,
Thanks for dropping by and leaving your comments.

I use fresh brown button mushrooms for this, sometimes I will use white or portabella mushrooms, whichever I can get my hands on. Besides mushrooms, I've added some pitted black olives too.

Wow, you guys are having so much fun at home! They really did a great job. Enjoy your day.
Cheers, kristy

Thank you so much for the reply! All the ingredients can be found in supermarkets like shop n save/ntuc?

Kristy,
Thanks! They sure had a great time and feel so proud of their own achievement.

Reira,
Yes, I bought all my ingredients from NTUC.

This is so cute! And how fantastic the pizzas look. Your children are very lucky!!

Elizabeth & Jared, thanks for your kind comments.

Reira, you are welcome.

Keep it up your good job as a Blessed Homemaker!!! You have done well :O))

Ruby,
Thanks for your kind words!

Wonderful that you bake with your kids! Such a good way to bond =)

Clare,
The kids love to get involved in the kitchen, definitely a great way to bond!


We bumped into your blog and we really liked it - great recipes YUM YUM.
We would like to add it to the Petitchef.com.

We would be delighted if you could add your blog to Petitchef so that our users can, as us,
enjoy your recipes.

Petitchef is a french based Cooking recipes Portal. Several hundred Blogs are already members
and benefit from their exposure on Petitchef.com.

To add your site to the Petitchef family you can use http://en.petitchef.com/?obj=front&action=site_ajout_form or just go to Petitchef.com and click on "Add your site"